A fatty acid is composed of a terminal carboxylate group and a long hydrocarbon chain. Fatty acids exert four major physiological roles in the organism. Firstly, fatty acids serve as building blocks of amphipathic molecules such as phospholipids and glycolipids, which are important components of biological membranes. Secondly, fatty acids can target many proteins to membrane locations by covalently attached to the targeted proteins. Thirdly, stored as triacylglycerols, uncharged esters of fatty acids with glycerol, fatty acids are the preferred fuel molecules for the heart and the preferred energy source for skeletal muscle at the time of prolonged exertion. Triacylglycerols are catabolized into free fatty acid and glycerol. In the liver and peripheral, through β-oxidation, free fatty acid is metabolized into acetyl CoA while glycerol is used for gluconeogenesis or triglyceride regeneration. Finally, fatty acid derivatives act as intracellular messengers and hormones. 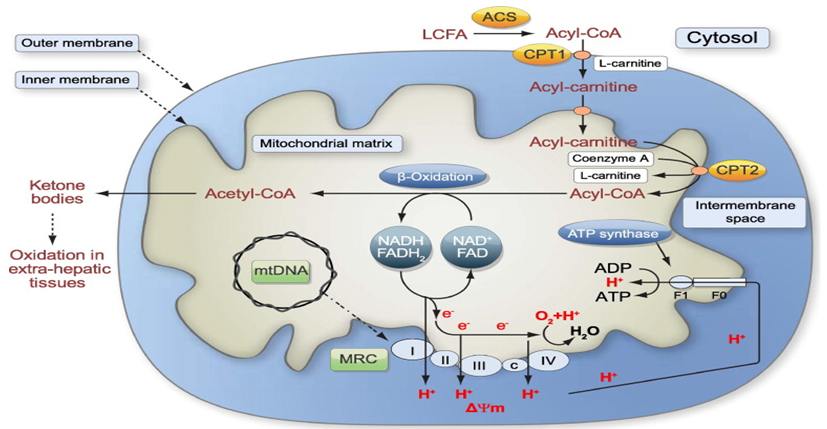 The degradation and synthesis of fatty acid are rather simple and they are the reverse of each other. Through the degradation pathway, the aliphatic compound fatty acid is converted to a series of activated acetyl units to enter citric acid cycle and offer energy. Through oxidation, fatty acid is activated and a double bond is introduced. By introducing oxygen, the double bond is hydrated. The alcohol is then oxidized and a ketone is formed. Finally, coenzyme A cleaves the four carbons fragment and acetyl CoA and a fatty acid with chains two carbons shorter are generated. If the fatty acid is saturated and has an even number of carbon atoms, the process will continue till the fatty acid is completely converted to acetyl CoA units. For each two carbons in the fatty acid, 5 ATPs is generated during the oxidation to acetyl CoA and another 12 ATPs through the coenzyme oxidation. Therefore, fatty acid is a rather potent energy store source.

The synthesis of fatty acid is essentially the reverse of this degradation process. The synthesis of fatty acids starts from activated acyl group and malonyl units. The malonyl unit reacts with the acetyl unit and a four-carbon fragment is generated. Exactly the opposite of degradation, the fragment is then reduced, dehydrated, and reduced again, the carbonyl group is then brought to the level of a methylene group and the butyryl CoA is then formed at the same time. Butyryl unit reacts with another activated malonyl group and this process continues till a C18 fatty acid is synthesized.