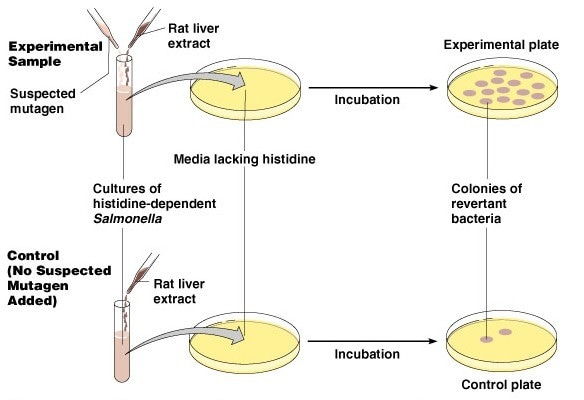 The Ames test, or bacterial reverse mutation test, introduced by Bruce Ames and his group in the early 1970s, currently is widely employed to assess the mutagenic potential of chemical compounds. In this biological assay, several strains of Salmonella typhimurium that carry mutations in genes responsible for histidine synthesis, so these strains cannot produce this critical amino acid. Ames test can evaluate the mutagenesis of tested substances by investigate if mutations that return to a "prototrophic" state (Reverse Mutation) can be induced, to survive on the histidine-free medium. The bacteria strains are spread on an agar plate with small quantity of histidine, which only allows the bacteria to grow for an initial time and have the opportunity to mutate. When the histidine is consumed, only bacteria that have mutated to obtain the ability for spontaneously histidine production will survive.

A positive result indicates that the tested chemical is mutagenic and therefore may act as a carcinogen, since cancer is often linked to genetic mutation in oncological study. The Ames test is taken as a rapid and convenient assay to estimate the carcinogenic potential because standard assays in pre-clinical trials are time-consuming (2~3 years) and more expensive. While false-positives and false-negatives are known, Ames test is still considered useful for the high correlation.

According to OECD Guideline 471, at least five strains, proven reliable and reproducibly responsive between laboratories, are needed. The applied strains are specially constructed to detect either frameshift (TA-1537 and TA-1538) or point (TA-1531) mutations to regain the ability to synthesize histidine, so different mechanisms can be identified. Meanwhile, rat liver S9 fraction would be spiked to mimic the mammalian metabolic conditions so the mutagenic potential of the chemical derivatives generated from the hepatic system can be assessed.

The tech team of Creative Proteomics is glad to discuss your case with scientific details, to provide reliable and robust analytical support to safety evaluation of synthesized chemicals.