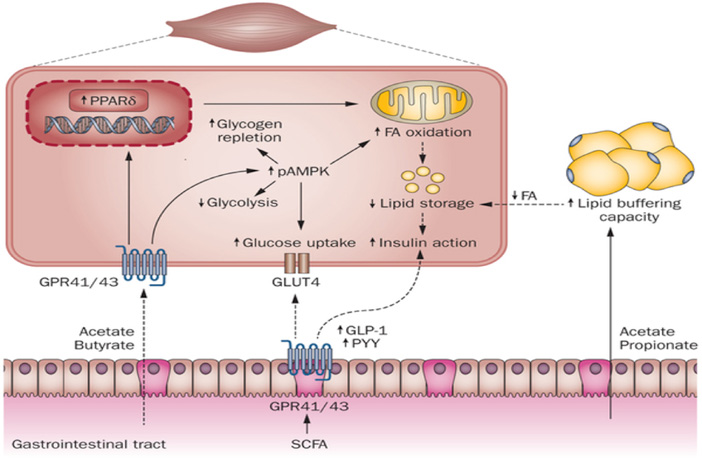 Short-chain fatty acids (SCFAs) are a sub-group of saturated aliphatic fatty acids contain 2-5 carbon (C) atoms, while acetate (C2), propionate (C3), and butyrate (C4) are the most abundant. They are the end products of fermentation of the dietary fibers by beneficial large intestinal bacteria. Humans don’t have the enzymes to degrade the bulk of dietary fibers. As a result, these nondigestible dietary fibers pass through the upper gastrointestinal tract without being digested and then enter the cecum and the large intestine and are fermented by the anaerobic cecal and colonic microbiota. The fermentation of dietary fibers produces a large number of metabolites including short-chain fatty acids (SCFAs).

To the microbial community, SCFAs are end products of no use, however, they are required to maintain the balance of redox equivalent production of the gut in the anaerobic environment. In the colon and stool, the molar ratio of acetate, propionate, and butyrate is about 60:20:20. The total concentration of SCFAs in the proximal colon ranges from 70mM to 140 mM, depending on the diet. In the distal colon, the concentration is lower, about 20mM to 70 mM. 95% of the produced SCFAs in the cecum and large intestine are rapidly absorbed by the colonocytes with the remaining 5% being secreted in the feces.

In the last few decades, it is shown that SCFAs play an important role in the prevention and treatment of a series of metabolic syndrome such as bowel disorders and some cancer. In some clinical studies, the administration of SCFAs can enhance the therapeutic efficacy of some immunological intestinal disorders like Crohn's disease, ulcerative colitis, and antibiotic-associated diarrhea, though the mechanism remains to be determined. It is indicated that SCFAs potently benefit mammalian energy metabolism, with the underlying mechanisms of intensive research interest. The excessive energy intake and lack of physical exercise result in a series of metabolic syndrome such as hypertension, obesity, dyslipidemia and loss of glycemic control. It is shown in epidemiological studies that higher dietary fibers intake will benefit body weight, food intake and glucose homeostasis and reduce the risk of metabolic disorders such as diabetes, cardiovascular disease, irritable bowel syndrome, inflammatory bowel disease, and colon cancer. That’s because dietary fibers are fermented by gut bacteria in the cecum and large intestine and produce SCFAs, which are beneficial.