Isobaric tags labeling technique was firstly applied for the simultaneous identification and relative quantification of peptide pairs by Thompson et al. in 2003. Tandem Mass Tag (TMT) system was designed by Thermo Fisher Scientific for the identification and quantification of proteins in different kinds of samples. Each TMT tagging reagent is composed of an amine-reactive NHS-ester group, a spacer arm and an MS/MS reporter. And the isobaric tagging reagent within a set has the same nominal parent (precursor) mass. These reporter ions are in the low mass region of the MS/MS spectrum and are used to report expression changes in cell-based or tissue samples that may not be amenable to metabolic isotopic labeling strategies such as SILAC.

The isobaric labels TMT (tandem mass tagging) are available in up to 11 tags that can be used for labeling practically any peptide or protein sample. TMT makes it possible to multiplex the analysis, to efficiently use the instrument time and exert further controls for technical variation. Due to its ability to multiplex up to 11 samples, TMT are widely used for quantitative protein biomarker discovery. TMTzero, TMTduplex, TMTsixplex, TMT10plex, and TMT11plex Reagents share an identical structure, allowing efficient transition from methods development to multiplex quantitation. 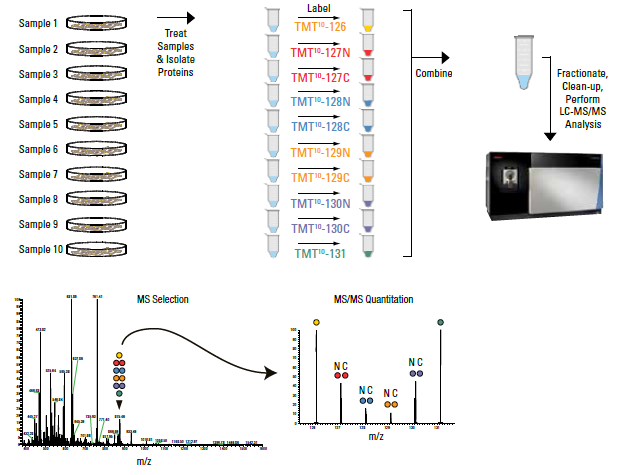 TMT quantification is performed by measuring the intensities of fragment reporter ions released from the labels in the tandem MS mode (MS2) during peptide fragmentation. Precursor ions are selected in the full scan mode (MS1) to be fragmented. Since ion selection step reduces the noise levels, it is advantageous. Ideally, only one selected precursor ion is fragmented during the precursor ion fragmentation. However, it is common that other precursor ions are caught within the specified m/z window and are fragmented together with the selected precursor in practice. This is precursor co-isolation or mixing. Isobaric Labelling works best with mass-spectrometers which allow MS3-level quantitation such as Thermo’s Fusion Orbitraps. The additional filtering step allows almost complete correction of co-isolation caused by contamination of MS1 precursors.

Thermo Scientific™ Orbitrap Fusion™ Lumos™ Tribrid™ mass spectrometer, which offers the most accurate quantitation and the highest number of protein identifications compared to other instrumentation.

Sample preparation is easy. Just send frozen cell or tissue samples and our team will do the rest. About 100 μg total protein per sample will be enough.

We have prepared a variety of materials for anyone interested in our solutions. Here are some of our recommended materials for your review!
See All Resources→ 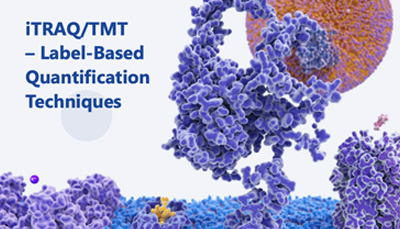