Proteins are amphoteric molecules, which contain both acidic and  basic amino acids. Amino acids that make up proteins may be positive, negative  or neutral, depending on the environment pH, and thus give a protein its  overall charge. The isoelectric point (pI) is the pH at which a particular  molecule carries no net electrical charge. Because the specific mutations,  truncation or post-translational modifications can change the pI of the natural  proteins. The net charge on the molecule is affected both by its own pI, and pH  of the surrounding environment, And the proteins can become more positively or  negatively charged due to the gain or loss, respectively, of protons (H+). At a  pH below their pI, proteins carry a net positive charge; above their pI they  carry a net negative charge; equal to their pI, proteins have no net charge and  thus do not migrate further in the electric field.

The isoelectric point of proteins can be  detected by isoelectric focusing (IEF). When proteins move towards the pole  opposite of its charge, they get immobilized in the pH gradient as they  approach their specific pI. As a result, the proteins become focused into sharp  stationary bands with each protein positioned at a point in the pH gradient  corresponding to its pI. In IEF, proteins only differing by a single charge  could be fractionated into separate bands, giving this technique extremely high  resolution.

Capillary  isoelectric focusing allows the separation of protein/peptide mixtures, protein  glycoforms and other charged variants, based on their isoelectric point (pI). A  voltage is applied to the anolyte and catholyte tanks, establishing a pH  gradient through the capillary. Proteins that are applied in the field can be  separated based on their net charge, and become immobilized when they reach a  pH, which equals to their pI.

In  Creative Proteomics, capillary isoelectric focusing, cIEF, an updated version  of Capillary electrophoresis-based technique is utilize for pI determination,  which displays superior resolution and accuracy, reproducibility and high  throughput; and Ion exchange chromatography, which can separate the protein  molecules depending on their net charge, is used to monitor charge variants of  protein therapeutics, to evaluate comparability between different lots.

Capillary  isoelectric focusing (cIEF) is a high-resolution analytical technique. Our  capillary electrophoresis service allows you to determine the isoelectric point  of a protein quickly and accurately. 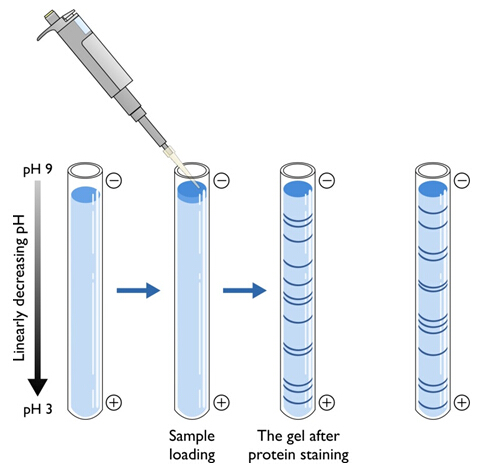 Application  of determination of PI: