Polyacrylamide gel electrophoresis (PAGE) is one of the most frequently employed techniques for separating macromolecules including DNA, RNA, and proteins

Electrophoresis is in general the process of applying an electric field to move charged molecules through a solution. In this technique, the mobility of a charged molecule is directly proportional to its net charge and the resistance of the solution through which it is moving.

Sodium Dodecyl Sulfate (SDS) is an anionic detergent, and its molecules have a net negative charge within a wide pH range when dissolved. A polypeptide chain binds certain amount of SDS in proportion to its relative molecular mass, and the negative charges on SDS destroy most of the complex structure of proteins, especially after previous reduction with reagents such as DTT. Then the protein becomes a rod-like, negatively charge macromolecule with comparable hydrodynamic qualities, the mobility of which depends only on their molecular mass.

However, when a mixture of proteins is added onto the gel, the smallest of the proteins will start to make their way through the gel even before the entire sample has entered the gel. In order to achieve better separation, the entire sample is condensed into the narrowest possible band right at the interface of the gel through a neat trick called a stacking gel, and here is how it works.

The polyacrylamide gel is created in two layers, the larger, "resolving" gel on the bottom, and a narrow "stacking" gel on top. The reservoirs on the top and the bottom of the gel contain a buffer made with glycine and adjusted to pH 8. 3. The stacking gel has a pH of 6. 8, while the resolving gel has a pH of 8. 8, both of which contain a buffer made with HCl.

During the electrophoresis, current will flow through the gel from one reservoir to the other, carried by negatively charged molecules. Since only about 10% of the glycine molecules are negatively charged at pH 8. 3, so here the current is carried mainly by Cl- in the stacking buffer, and the Cl- ions pile up towards the bottom of the stacking gel ahead of the proteins. The effect is that within the stacking gel, the SDS-coated protein molecules are sandwiched between glycine molecules above and Cl- below, and are compressed into a band of much smaller volume than was originally loaded.

Once an SDS-PAGE gel is run, you need to fix the proteins in the gel so they don't come out when you stain the gel. Acetic acid 25% in water is a good fixative, as it keeps the proteins denatured. The gel is typically stained with Coomasie blue dye R250, and the fixative and dye can be prepared in the same solution using methanol as a solvent. The gel is then destained and dried. 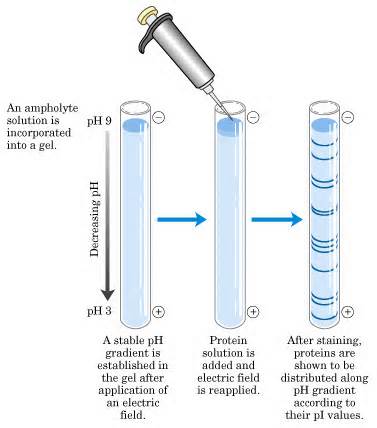 Isoelectric focusing (IEF) is an electrophoretic technique for the separation of proteins based on their isoelectric point (pI). The pI is the pH at which a protein has no net charge and thus, does not migrate further in an electric field.

In IEF, the separation is carried out in a slab of polyacrylamide or agarose gel that contains a mixture of ampholytes, which migrate in the gel and create a pH gradient when subjected to an electric field.

For IEF analysis, molecules to be focused are distributed over the medium with established pH gradient. An electric current passes through the medium and creates a "positive" anode and "negative" cathode end. Negatively charged molecules migrate through the pH gradient in the medium toward the "positive" end while positively charged molecules move toward the "negative" end. As a particle moves towards the pole opposite of its charge, it is immobilized in the pH gradient as they approach their specific pI.

As a result, the proteins become focused into sharp stationary bands with each protein positioned at a point in the pH gradient corresponding to its pI. The IEF technique is capable of extremely high resolution, and even proteins only differing by a single charge could be fractionated into separate bands.