Peptidoglycan (also referred to as murein), an essential and specific component of the bacterial cell envelope, forms a mesh-like layer outside the cytoplasmic membrane, is responsible for rigidity and shape of bacterial cells and protects them from osmotic disruption. Indeed, any inhibition of its biosynthesis (mutation, antibiotic) or its specific degradation (e.g. by lysozyme) during cell growth will result in cell lysis. Peptidoglycan also contributes to the maintenance of a defined cell shape and serves as a scaffold for anchoring other cell envelope components such as proteins and teichoic acids. It is intimately involved in the processes of cell growth and cell division. It is a polymer that occurs in cell walls of both Gram-positive and Gram-negative bacteria but has not been found in Archaea. In Gram-positive bacteria it represents about 30-70% of the cell wall aside from polysaccharides, teichoic or teichuronic acids. It is only a minor component in Gram-negative cell walls that mainly consist of lipopolysaccharides and lipoproteins. The investigation of peptidoglycan structure exerts a vital roles in understanding immune responses, the action of antibiotics and mechanisms of resistance, phage susceptibility and serological behavior, and on bacteria classification and identification.

Peptidoglycan is a heteropolymer that consists of glycan strands that are crosslinked by peptides. The glycan backbone is composed of alternating units of N-acetylglucosamine and N-acetylmuramic acid linked by β-1,4-glycosidic bonds. The peptide subunits usually contain four alternating L- and D-amino acids, and they are connected to the glycan stands via the lactyl groups of the N-acetylmuramic acid residues. Cross-linking of the glycan strands generally occurs between the carboxyl group of D-Ala at position 4 and the amino group of the diamino acid at position 3, either directly or through a short peptide bridge. 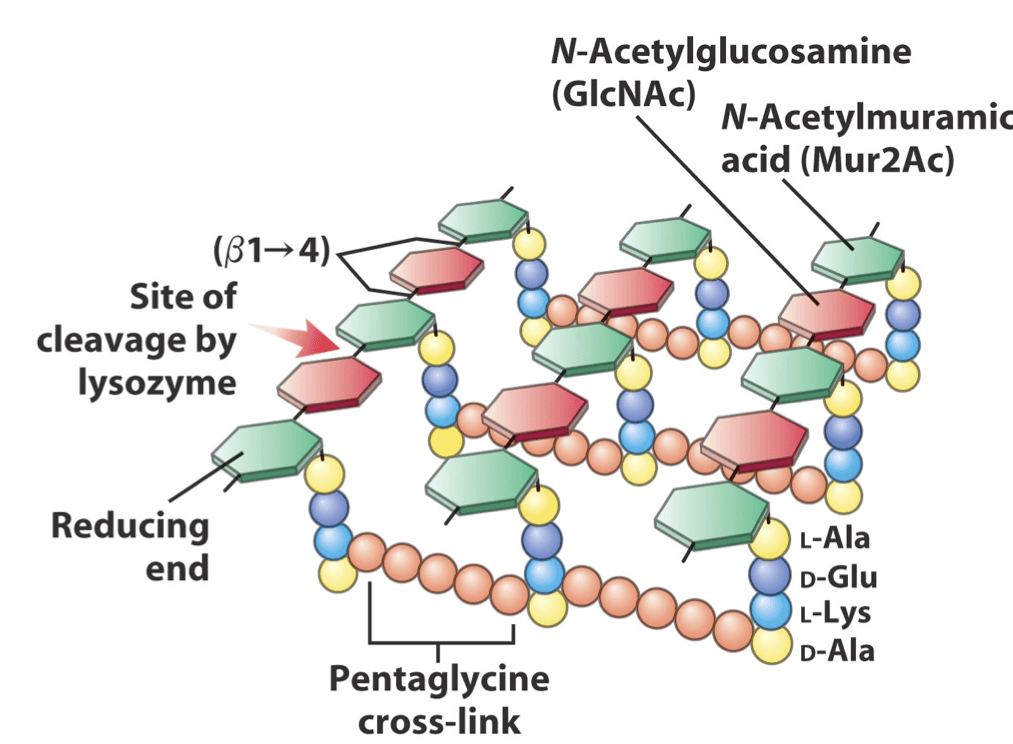 The peptidoglycan has a three-dimensionally cross-linked structure; therefore, it is typically an insoluble polymer. Structural analysis of peptidoglycan usually involves hydrolyses to amino acids, peptides, and amino sugars or enzymatic digestion of glycan strands to muropeptides in order to obtain structural information from its constituents. Depending on the complexity of the peptidoglycan structure, a wide range of analytical techniques (e.g. TLC, 2D-TLC, GC, MS) must be applied. Total hydrolysis followed by 2D-TLC or GC/MS can be used to detect the amino acid composition of the peptidoglycan qualitatively or quantitatively. The enantiomers of amino acids can be analyzed by gas chromatography using a chiral column. The N-terminus of the interpeptide by dinitrophenylation can also be determined by TCL. In some cases, partial hydrolysis followed by 2D-TLC can be used to analyze resulted short peptides. With knowledgeable experts and years of experience, Creative Proteomics offers accurate, reliable structure Analysis for peptidoglycans.