Saccharomyces cerevisiae (baker’s yeast) is a widely used model organism for studying eukaryal cell physiology and molecular events. Yeast has been used to pioneer transcriptome, proteome and interactome studies, and the branch of lipidomics of lipids in the yeast has been termed "yeast lipidomics". S. cerevisiae has a relatively simple lipidome compared to other eukaryotic cells and comprises some 150 distinct molecular species that have been identified to date. It uses a conserved network of lipid metabolic pathways. Yeast contains mainly FAs with 16 or 18 carbon atoms, which are saturated (~20%) or mono-unsaturated (~80%). In contrast to mammalian cells, yeast contains only mono-unsaturated FAs with a double bond between C9 and C10, which significantly reduces the combinatorial acyl-chain complexity in the yeast lipids. 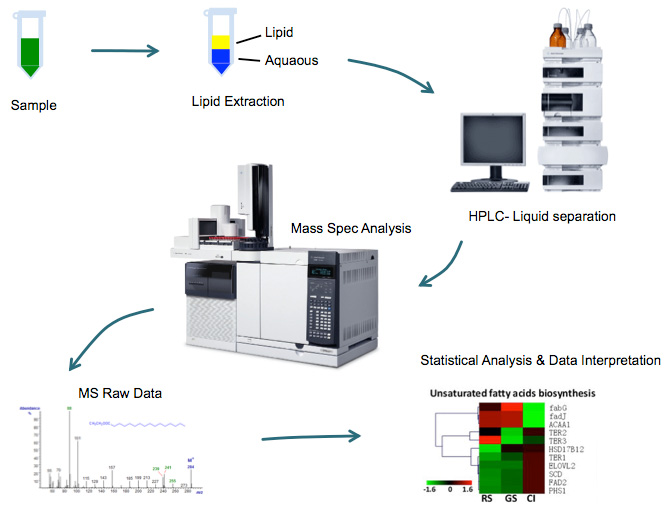 Even though lipid metabolism is different from their mammalian counterparts in some cases, for example, ergosterol, which is synthesized in a complex series of condensation, cyclization, and redox reactions from C5 (isoprene) backbone, is the major sterol in yeast instead of cholesterol. Nevertheless, the yeast model system offers a great opportunity to manipulate proteins that control the synthesis, turnover, localization and degradation of specific lipid species. Yeast membranes has been shown to be very sensitive to different types of stress, such as D-limonene stress, salt stress, hypoxic stress, and nutrient stress. The change of membrane lipidome was suggested to play an important role in stress adaptation.

With the development of Mass spectrometry methodology, yeast lipidome can be profiled as a whole with increasing accuracy and sensitivity. The instrumentation useful for the identification and quantification of yeast lipidomics includes MS, GC, HPLC, or LC-MS, GC-MS. The coupling of chromatographic methods such as GC or HPLC with MS can greatly increase coverage of lipids. As one of the widely used analytical techniques in yeast lipidomics, LC-MS is utilized to qualitatively and quantitatively analyze a wide range of lipid species in yeast, including PC, PE, PI, PS, PA and many others.

How to place an order