Eicosanoids include prostaglandins (PG), thromboxanes (TX), leukotrienes (LT), and lipoxins (LX). Prostanoids refer to PGs and TXs. The names of prostanoids are given according to the number of carbon-carbon double bonds in the molecule. Because of the presence of two carbon-carbon double bonds, most of the biologically active prostaglandins and thromboxanes are series 2 molecules. The eicosanoids with four carbon-carbon double bonds are series 4 molecules. Prostaglandins are first shown being produced in the prostate gland. Thromboxanes are first shown being synthesized in platelets (thrombocytes). And leukotrienes are first identified from leukocytes. Therefore, they were given their respective names. The lipoxins are inflammation involved with eicosanoids, which are produced through lipoxygenase interactions. In response to ingestion of aspirin, the synthesis of lipoxins can be increased according. Therefore, lipoxins are powerful inflammation modulating eicosanoid compounds. Other eicosanoid derivatives include resolvins (Rv) and the protectins (PD). 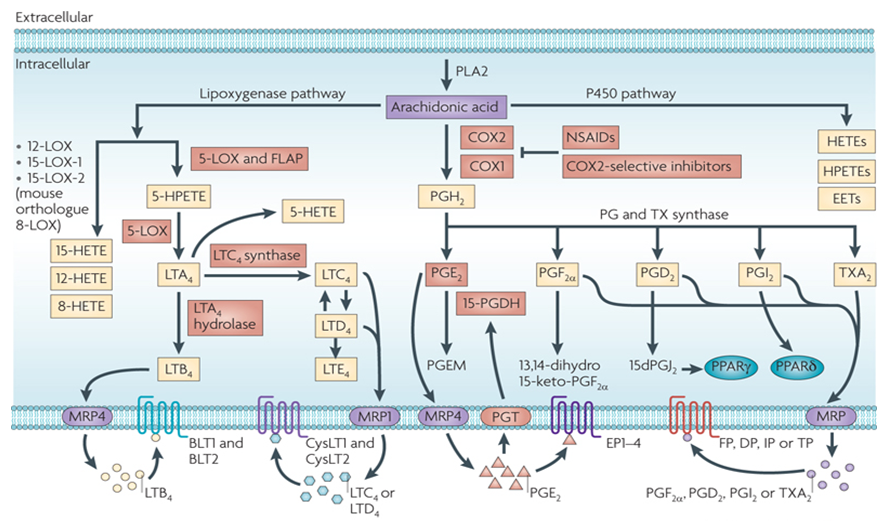 Eicosanoids play an important role in the inflammatory responses of the joints, skin and eyes, on the induction of labor and on the intensity and duration of pain and fever. They also assist in the inhibition gastric acid secretion, regulation of blood pressure through vasodilation or constriction, and inhibition or activation of platelet aggregation and thrombosis. The eicosanoids of greatest biological importance to humans are a large number of molecules arachidonic acid derivatives in the reaction pathway from linoleic acid to arachidonic acid. There is also a small group of eicosanoids comes from eicosapentaenoic acid derived from α-linolenic acid. The main source of arachidonic acid is cellular stores release. Inside the cell, arachidonic acid localized primarily at the C–2 positions of membrane phospholipids and the release is triggered by the activation of PLA2.

Eicosanoids can be synthesized in all mammalian cells except erythrocytes. These molecules are rather powerful, minimum amount of eicosanoids can exert potent physiological effects. At the site of synthesis, eicosanoids exert their roles locally through receptor-mediated G-protein linked signaling pathways. There are two main pathways are associated with the biosynthesis of eicosanoids. Prostaglandins and thromboxanes are generated in the cyclic pathway, while the leukotrienes are produced in the linear pathway.