Metabolomics is an “omics” branch mainly associated with the high-throughput identification and quantification of small molecule (<1500 Da) metabolites. In other “omics” fields, such as genomics, transcriptomics and proteomics, thousands of targets can be identified and quantified simultaneously. However, for metabolomics, only fewer than two dozen metabolites can be identified and quantified at a time in most of published metabolomic studies. Improvements in analytical technology together with the increased interest in comprehensive, quantitative metabolic profiling contribute to the increased pressures among the metabolomics community to centralized metabolite reference resources. With the emergence of Human Metabolome Database (HMDB), KEGG, LipidMaps, PubChem and MassBank, metabolomics studies are becoming much more quantitative and more expansive in metabolites coverage. So far, there are 4651 detectable metabolites in Human Serum Metabolome Database. The number is still increasing as other lower abundance metabolites are identified with the development of technology. 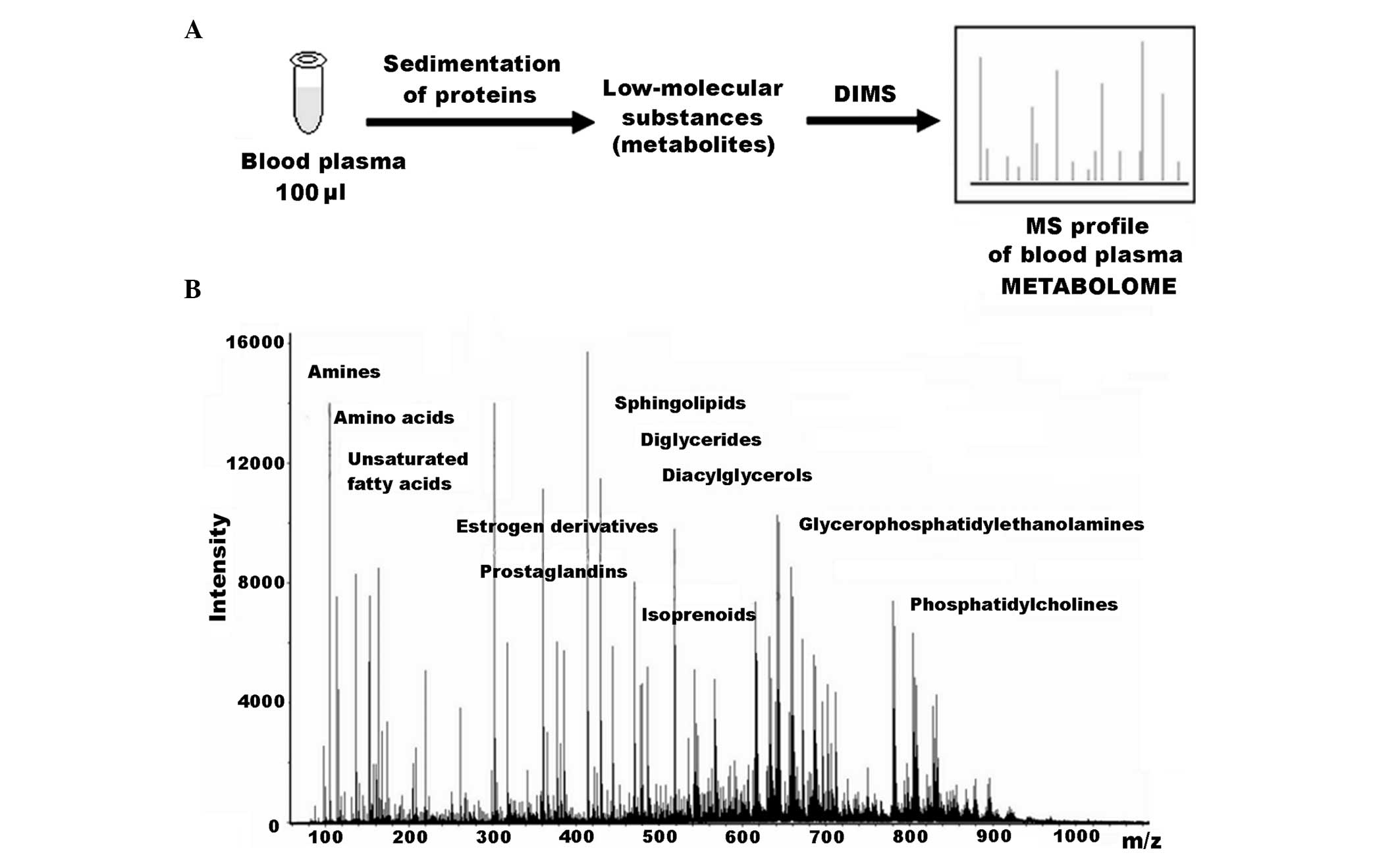 Blood is composed of a cellular component including red and white blood cells and platelets, and a liquid carrier, named plasma. Plasma accounts for about 50–55% of blood volume. Comparing to plasma, serum is less viscous don't have fibrinogen, prothrombin and other clotting proteins. Serum contains a large number of substances including nutrients (such as lipids, carbohydrates and amino acids), proteins and peptides (such as globulins, albumins, lipoproteins, hormones and enzymes), electrolytes, organic wastes and many other small organic molecules dissolved in them. As a primary carrier of small molecules in the body, serum plays a crucial role in the transportation of dissolved gases, hormones, nutrients and metabolic wastes, it also assists in the regulation of the ion composition and pH of interstitial fluids, the stabilization of body temperature, the defense against toxins and pathogens and the restriction of fluid losses at injury sites. Since blood enter every tissue and every organ in the body, it acts as an important liquid highway for all the molecules secreted, excreted or discarded by different tissues in response to different physiological or pathological stresses. Tissue injuries, organ dysfunctions and pathological states can change both the chemical and protein composition of blood serum. Being an important and easily accessible biological fluid, serum or plasma has therefore been the subject most of today's clinical tests for more than 70 years.

A large number of tables of normal reference range for many blood, gases, ions and about 100 metabolites have been published for many years. Various platform including NMR, LC-MS, GC-MS, UPLC-MS and RPLC are used extensively for “global” metabolites profiling. Besides these global metabolomic studies, hundreds of other “targeted” metabolite studies have been introduced to identify and quantify hundreds of serum metabolites. Remarkably simple and surprisingly uncomplicated NMR spectrum of ultrafiltered serum highly facilitates the identification and quantification of serum metabolites. Generally speaking, 98% of all visible peaks can be assigned to a compound. GC-MS only yields limited number of identifiable peaks. With the use of fast-scanning quadrupole GC-MS and a series of solvent extraction steps, about 120 compounds can be quantified. Though NMR and GC-MS are especially useful for the identification and quantification of polar metabolites of moderate abundance, they are less effective for the detection of metabolites in low abundance. LC-MS, however, are superb at identifying and quantifying low-abundance metabolites of various polarity range.