Cerebrospinal fluid (CSF) is secreted in the central nervous system and fills the ventricles, the subarachnoid space of the brain and spinal column. The role of CSF lies in protecting the brain from physical shock. Also, CSF also plays an important role in the circulation of nutrients and chemicals filtered from the blood and waste management through removing organic acids either by active transport or bulkflow from the extracellular fluid in the brain to the subarachnoid compartment, and finally into the venous blood vessels and the lymphatic system. It is known that human cerebral spinal fluid (CSF) is rich in small molecule biomarkers for neurodegenerative and neurological diseases. Though CSF is not an easily accessible, its relative metabolic simplicity along with potential importance to central nervous system diseases poses it particularly important in biomedical research and clinical chemistry. 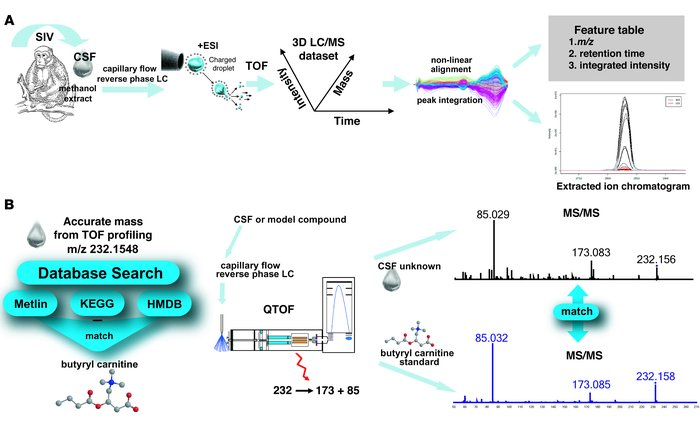 The components of CSF is directly relies on metabolite production rates in the brain. Therefore, analysis of the CSF metabolome can offer biochemical clues into central nervous system diseases like brain injury, multiple sclerosis and Parkinson’s disease. Over the past 50 years, different technologies have been used for the characterization of the CSF metabololites. High-throughput metabolomic techniques applied to CSF analysis includes1H-NMRspectroscopy, LC-MS, GC-MS, DFI-MS/MS, ICP-MS. As the widely regarded best techniques for the characterization of the elements of biological samples, ICP-MS can be used for the quantitative analysis of trace metals in CSF. CSF is reasonably rich in trace metals and they play a crucial role in enzyme function and a large number of neurodegenerative diseases such as Alzheimer's disease, Parkinson's disease and other related disorders. ICP-MS can be effectively used for identification and quantification of a large number of trace minerals. The DFI-MS/MS method offers quantitative platform for 67 unique compounds can't be identified with GC-MS, LC-MS and NMR. Of all these metabolomics platforms for CSF, NMR is the fully determined platform of highest coverage.

Up till 2008, the human CSF metabolome includes 308 fully identified and quantified metabolites, of which 23% (70 compounds) are routinely identified with the combination of NMR, GC-MS and LC-MS. Because of the hydrophobicity of CSF, NMR was shown to be the most fully determined and fully assigned metabolomic platform for characterizing CSF. In 2011, this number increase 54% over the 2008 edition and at least 476metabolites in human CSF are fully identified and quantified. It is indicated that though no improvements is achieved with the older platforms, the addition of these two newer platforms DFI-MS/MS and ICP-MS led to significant improvements in the identified metabolites. The combination of five platforms: NMR, GC-MS, LC-MS, DFI-MS/MS and ICP-MS allowed for the measurement of 170(36%) among 469 known CSF metabolites. The growth in the number of the known metabolites and the growth in metabolites coverage both indicate our ability to characterize CSF metabolites is improving faster than our knowledge of the CSF metabolites.

Typically, the volume of each CSF samples for metabolites analysis is 0.5 to 1.0 ml. CSF samples should be placed in a freezer at -80°C for long-term storage. Due to the lack stability of CSF metabolites, repetitive freeze-thaw cycles and higher storage temperatures (such as 4°C) should be avoided.