As the second stage of cellular respiration, TCA cycle, tricarboxylic acid cycle, also called Krebs cycle or citric acid cycle, is an important aerobic pathway for the complete oxidation of carbohydrates and fatty acids. It is a pathway widely exists all aerobic living organisms. The TCA cycle plays an important role in the metabolism of organic fuel molecules such as glucose, fatty acids, some amino acids and some other sugars. Before entering the TCA cycle, these rather large molecules must be degraded into acetyl coenzyme A (acetyl CoA), a two-carbon compound. Acetyl-CoA is the activated form of acetate. The primary sources of acetyl-CoA are pyruvate oxidation of carbohydrates, glycolysis of glucose, and beta-oxidation of fatty acids. The NADH generated in this pathway is used for the oxidative phosphorylation and other metabolism pathways. 2-oxoglutarate is one of the important precursor metabolites generated in this pathway. Carbon dioxide and ATPs are the end products of citric acid cycle. At the end of the cycle, oxaloacetate is regenerated. So, TCA cycle is a closed loop. 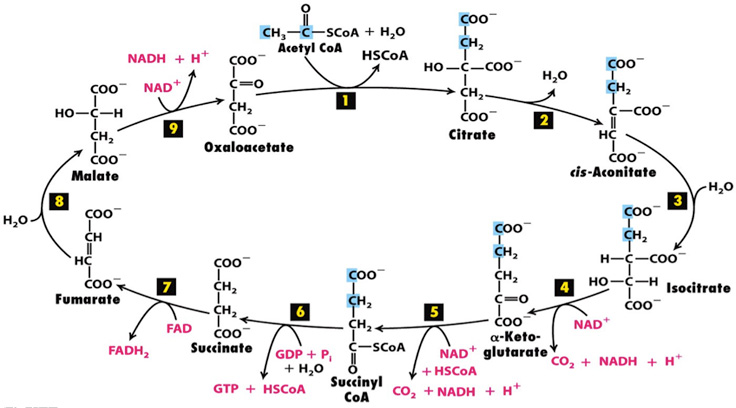 The citric acid cycle occurs in the matrix of the mitochondria, the place where the conversion from pyruvate to acetyl CoA occurs. Except the succinate dehydrogenase embedded in the inner membrane of the mitochondrion, all the enzymes in TCA cycle are soluble and localized in mitochondria. There are eight different enzymes responding for the catalysis of eight steps in TCA cycle. In the first step, acetyl CoA reacts with oxaloacetate and generate citrate and to coenzyme A (CoA-SH). In the second step, citrate converts to its isomer, isocitrate, after a series of reactions. In the third step, after losing a molecule of carbon dioxide, isocitrate is then oxidized to alpha-ketoglutarate. In the fourth step, alpha-ketoglutarate loses another molecule of carbon dioxide and undergoes oxidation to form succinyl CoA. In the fifth step, catalyzed by crucial enzyme, succinyl CoA is converted to succinate. In the sixth step, succinate undergoes oxidation and form fumarate. In the seventh step, fumarate is hydrated and form malate. In the last step, malate is oxidized and regenerate oxaloacetate. After a series of redox, hydration, dehydration, and decarboxylation reactions, two carbon dioxide molecules, one GTP/ATP, and reduced forms of NADH and FADH2 are produced. The generated NADH and FADH2 act as electron donors for oxidative phosphorylation and other physiological processes.