Ketone bodies refer to three molecules, acetoacetate (AcAc), 3-hydroxybutyrate (3HB) and acetone. 3HB is formed from the reduction of AcAc in the mitochondria. These two predominant ketone bodies are energy-rich compounds that transport energy from the liver to other body tissues. Acetone is a minor product, generated by spontaneous decarboxylation of AcAc and is responsible for the sweet odor on the breath of individuals with ketoacidosis.

Ketone body metabolism includes ketone body synthesis (ketogenesis) and breakdown (ketolysis). When the body goes from the fed to the fasted state the liver switches from an organ of carbohydrate utilization and fatty acid synthesis to one of fatty acid oxidation and ketone body production. This metabolic switch is amplified in uncontrolled diabetes. In these states the fat-derived energy (ketone bodies) generated in the liver enter the blood stream and are used by other organs, such as the brain, heart, kidney cortex and skeletal muscle. Ketone bodies are particularly important for the brain, which has no other substantial non-glucose-derived energy source. The two main ketone bodies are acetoacetate (AcAc) and 3-hydroxybutyrate (3HB) also referred to as β-hydroxybutyrate, with acetone the third, and least abundant. Ketone bodies are always present in the blood and their levels increase during fasting and prolonged exercise. After an over-night fast, ketone bodies supply 2–6% of the body's energy requirements, while they supply 30–40% of the energy needs after a 3-day fast. When they build up in the blood they spill over into the urine. The presence of elevated ketone bodies in the blood is termed ketosis and the presence of ketone bodies in the urine is called ketonuria. The body can also rid itself of acetone through the lungs that gives the breath a fruity odour. Diabetes is the most common pathological cause of elevated blood ketones. In diabetic ketoacidosis, high levels of ketone bodies are produced in response to low insulin levels and high levels of counter-regulatory hormones. 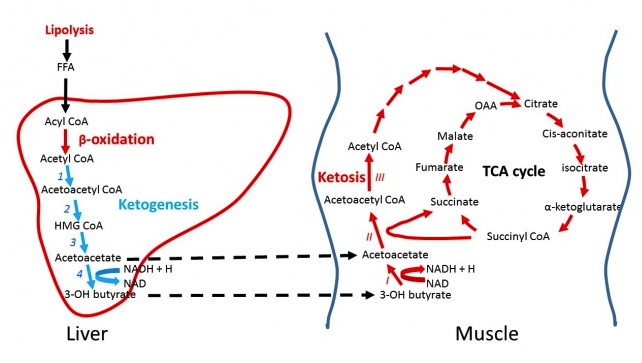 Ketone bodies are insignificant in the blood and urine of normal individuals in the postprandial or overnight-fasted state. However, these ketoacids become important sources of metabolic energy in circumstances in which the availability of glucose is restricted, as during prolonged fasting, or when the ability to use glucose is greatly diminished, as in decompensated diabetes mellitus. During prolonged starvation the arterial concentrations of these metabolically active strong organic acids increase approximately 70-fold to 10 to 12 mM and to significantly higher levels of 30 to 40 mM in diabetic ketoacidosis. The mechanisms responsible for the development of ketonemia are: (1) increased production by the liver; (2) decreased peripheral utilization in muscle; (3) reduced volume of distribution. Since ketone bodies are not bound to plasma proteins, they are freely filterable solutes in the renal glomerulus and appear quantifiably in the tubular urine. At the very low plasma concentrations of ketone bodies that are encountered normally after an overnight fast, urinary excretion rates are negligible. When plasma levels increase beyond 0.1 to 0.2 mM, however, excretion increases and measurable amounts of ketone bodies appear in the urine.

Poorly controlled or decompensated diabetes mellitus is the most common pathologic condition causing ketonuria. As a result, routine testing of urine for ketones in diabetics has been universally employed in hospitals and by outpatients to assess adequacy of diabetes control and determine insulin dosage during periods of loss of control. The presence or absence of ketonuria is also useful for clinical classifications of fasting hypoglycemia in infancy and childhood. The absence of ketone bodies is evidence for excess insulin secretion associated with beta cell neoplasia, whereas ketonuria suggests a lack of fuel availability. Thus ketone bodies quantification is quite necessary for scientist research and clinic trial. Here Creative Proteomics provides a fast and reliable LC-MS/MS method for the quantification of ketone bodies.