Principal component analysis (PCA) is a broadly used statistical method that uses an orthogonal transformation to convert a set of observations of conceivably correlated variables into a set of values of linearly uncorrelated variables called principal components. This is an unsupervised statistical analysis approach that is probably the most widely used statistical tool in metabolomics studies. PCA is mostly used as a tool in exploratory data analysis and for making predictive models. 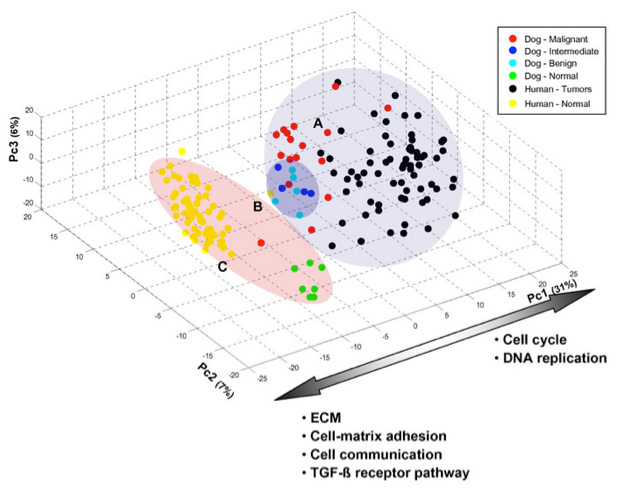 PCA converts high-dimensional data into low dimensions, by projecting the data into a reduced dimensional subspace, while retaining as much variance from the raw data as possible. The number of principal components is equal to or less than the number of initial variables. This transformation is defined in such a way that the first principal component has the highest possible variance, and each succeeding component in turn has the largest variance possible under the constraint that it is orthogonal to the preceding components. The procedure is repeated until the datasets can be presented within fewer (usually two or three) dimensions. This facilitates visual inspection of these distributed samples in principal component space, using score plots. The Euclidian distance between samples in score plots indicates the degree of systematic variation in metabolite profiles among individual samples, and loading plots show the contribution of individual metabolites to each PC. The resulting vectors are an uncorrelated orthogonal basis set. Prior to the development of more effective data analyses, such as pattern recognition, classifications or clustering, the majority of metabolomic studies used PCA method as a first exploratory step.