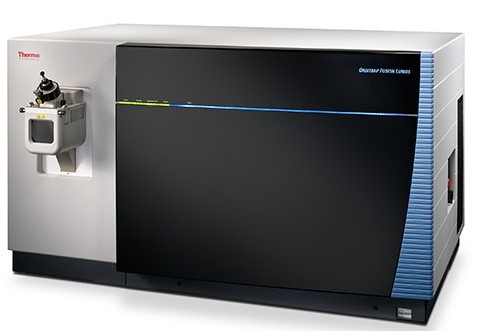 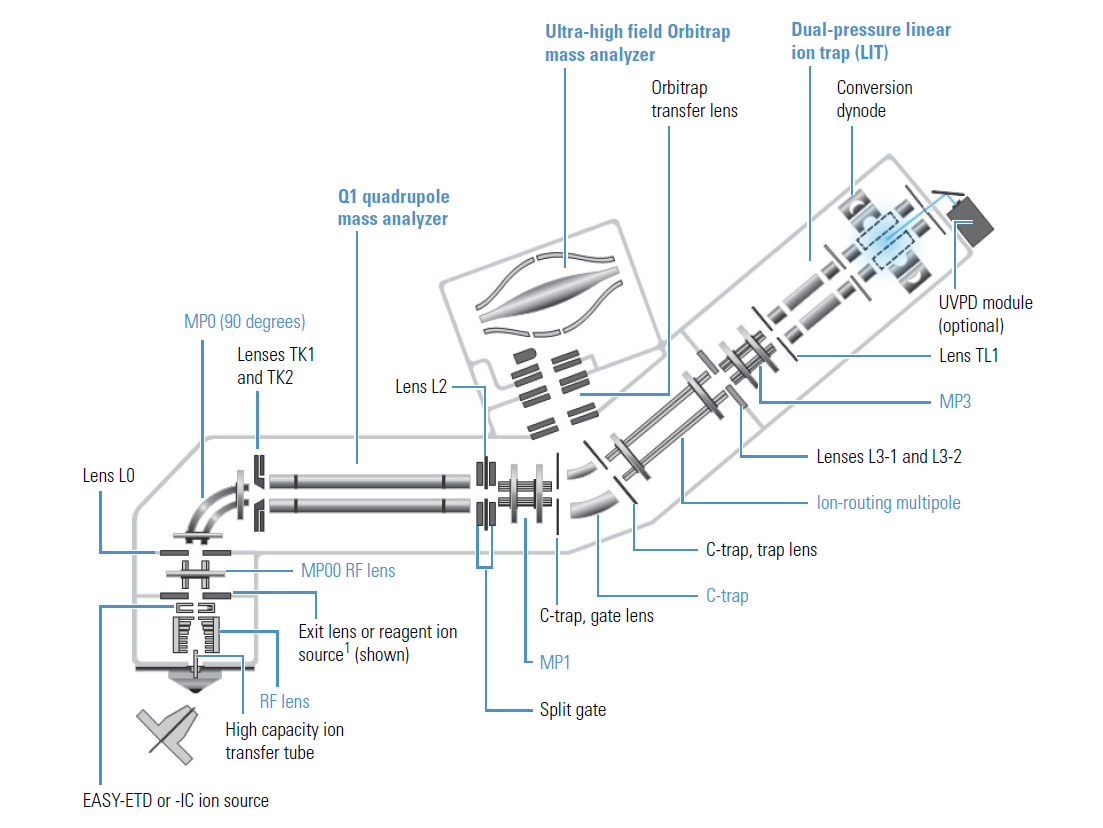 After separated by liquid chromatograph (LC) column, compounds pass through a sample transfer line and enter the mass spectrometer (MS) for ionization and analysis. The MS can provide information about the mass-to-charge ratios (m/z) of compounds, as well as structural and quantitative information by performing MSn experiments. The basic structure of Orbitrap Fusion Lumos tribrid mass spectrometer includes ion source, ion optics, mass analyzer, and detector. Next, the characteristics and roles of each part will be introduced. 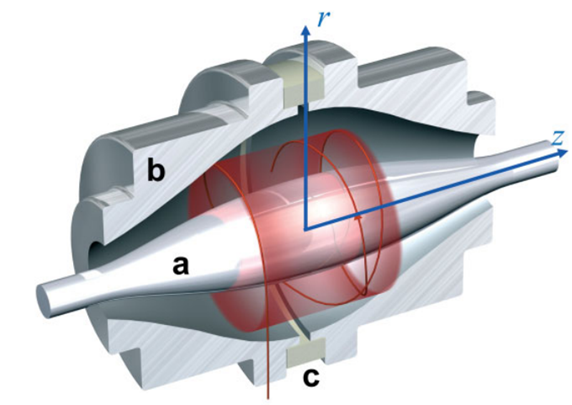 Figure 3. Schematic of the Orbitrap cell

The Orbitrap Fusion Lumos MS has a high-sensitivity and off-axis ion detection system. The detection system contains two conversion dynodes and one electron multiplier. It produces a high signal-to-noise ratio (S/N), which is proportional to the number of ions detected, and enables voltage polarity switching between positive and negative ion modes of operation.

The MS scan (or full-scan MS) corresponds to a single stage of mass analysis. In this scan type, the ions formed in ion source are stored in the IRM. The ions are then transferred to the Orbitrap or LIT mass analyzer to produce a full mass spectrum of the observable ions in the specified mass range. The MS scan can be used for qualitative and quantitative analysis. This scan type is useful to determine the molecular weight and intensity of compounds.

The MS2 scan selects the MS/MS mass analysis. In the first stage of MS/MS scan, you can choose the Quadrupole or the ion trap to select ions. The selected ions are then transferred to higher-energy collisional dissociation (HCD) in the IRM, or to the LIT for CID, electron transfer dissociation (ETD), or UVPD. In the second stage of MS/MS scan, the product ions are transferred into the orbitrap or the LIT for analysis and detection. In the MSn scan, the scan power of n is typically from 2 to 10, which means it involves 2-10 mass analysis stages. Each stage contains an ion selection step. When the scan power is higher, the more structural information of compounds can be obtained.

The selected ion monitoring (SIM) is a single stage of mass analysis, which can monitor a particular ion or a set of ions. In this scan type, the ions in the defined m/z range are selected and detected by orbitrap or the LIT to produce a mass spectrum of SIM.

The Orbitrap Fusion Lumos Tribrid MS with superior sensitivity, selectivity, and versatility to enable researchers to obtain the highest quality data. Equipped with the brightest ion source, the most selective quadrupole, the fastest ion trap analyzer, enhanced dissociation technologies and an ultra-high resolution Orbitrap analyzer, it can be used for many challenging applications.

PTMs regulate activity localization, and interaction with other cellular molecules such as proteins, nucleic acids, lipids, and cofactors. Hence, they play an important role in the functional proteomics. The Orbitrap Fusion Lumos MS, with several fragmentations like CID, HCD, ETD, and EThcD are helpful for PTM analysis, especially glycosylation. For example, ETD and EThcD can provide MS/MS spectra of glycopeptide backbone fragmentation, which leads to accurate modification site localization.

Due to the high sensitivity and high resolution, the Orbitrap Fusion Lumos MS is a useful instrument for identification and quantitation of small molecules. It can be used for the determination of highly accurate molecular formulae because the fine isotopic structure can be observed. This direct measurement removes the ambiguity of pattern matching estimations. In addition, the brighter ion source makes it to achieve far lower levels of quantitation.

The Thermo Scientific Orbitrap Fusion Lumos Tribrid mass spectrometer has some advanced features, including a new API interface, advanced Quadrupole technology, high-field Orbitrap analyzer, and a dual-pressure linear ion trap. The unique instrument architecture can perform multiple dissociation techniques (like HCD and CID) at any fragmentation stage and analyze ions in either the linear ion trap or Orbitrap mass analyzer. At Creative Proteomics, we can provide various services based on our Orbitrap Fusion Lumo Tribrid mass spectrometer platforms, including: