Mass spectrometry (MS) is a powerful analytical tool with high sensitivity and high mass accuracy. Recent technical innovations in mass spectrometry-based techniques have contributed to a range of highly sensitive and versatile instruments for high-throughput, high-sensitive, and proteome-scale profiling. Next, we will introduce some types of mass spectrometers to help with your research. 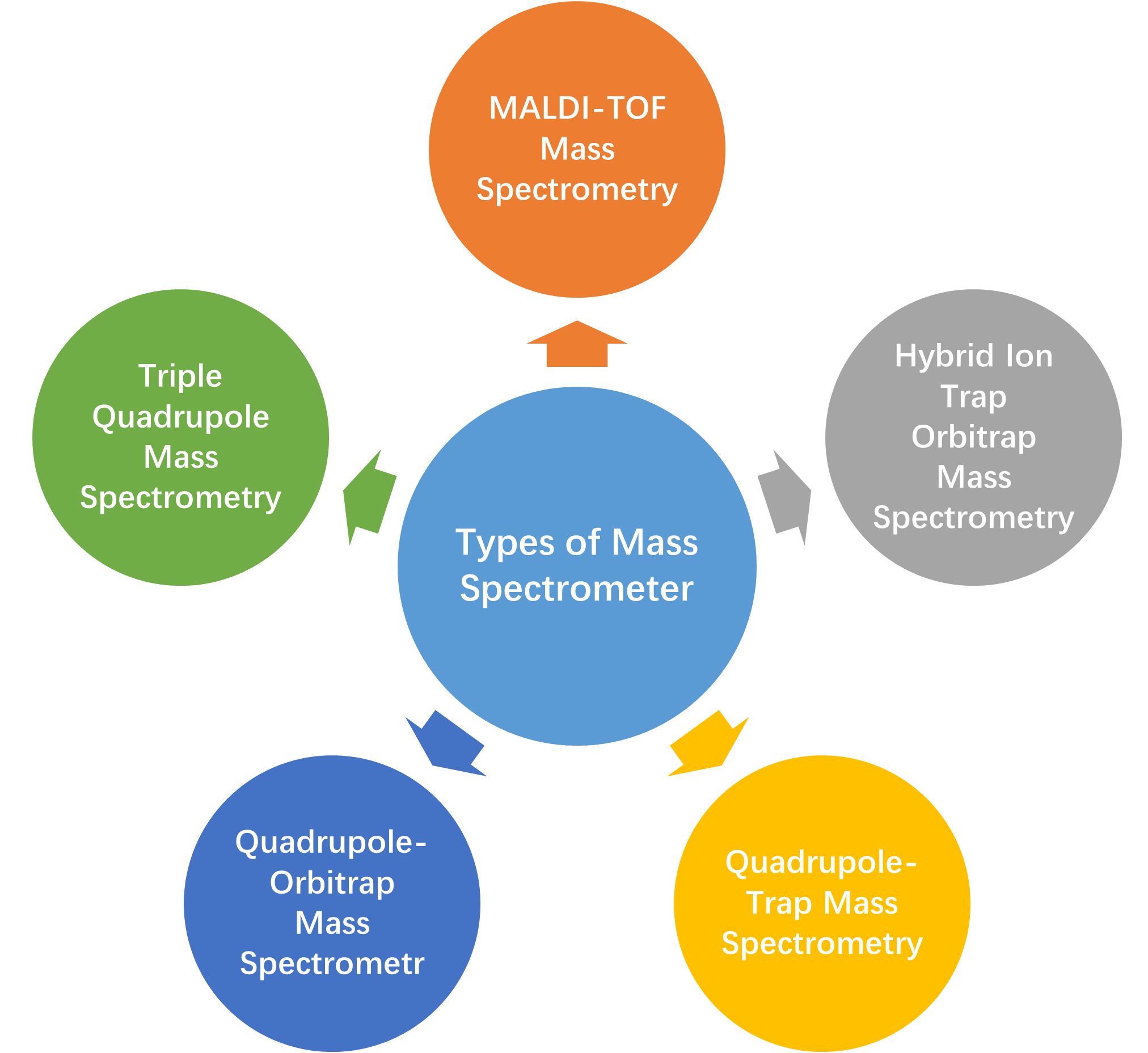 Matrix-assisted laser desorption ionization-time of flight mass spectrometry (MALDI-TOF MS) is a commonly used MS technique. MALDI is a soft ionization technique to create ions with minimal fragmentation by using a laser energy. In TOF, the protonated ions are accelerated by an electric field to make an ion have the same kinetic energy as any other ions that have the same charge. The velocity of the ion depends on the mass-to-charge (m/z) ratio and the time that takes for the ion to reach a detector is measured. MALDI-TOF mass spectrometry can analyze a wide variety of biomolecules, including peptides and carbohydrates.

The triple quadrupole mass spectrometer (TQMS or QqQ), is a tandem mass spectrometer in which the first and third quadrupoles act as mass filters and the second acts as a collision cell to fragment the selected precursors/parent ions, and to generate fragment/daughter ions. The TQMS is probably the most famous and widely used tandem MS, which is relatively simple and easy-to-use with good reproducibility to offer various applications at a low cost. Triple quadrupole mass spectrometer can be used for structural elucidation that can provide information about fragmentation patterns. And TMPQ is very useful for quantitative studies. Due to increased sensitivity and specificity yielding lower detection and quantification limits, TQMS is a vital option for many areas, such as pharmaceutical development, clinical research, environmental studies and so on.

The Quadrupole Trap MS is a hybrid triple mass spectrometer. Different from classical triple quadrupole mass spectrometry, the Q3 can work as either a standard quadrupole mass filter or a linear ion trap (LIT) with higher sensitivity than traditional 3D ion trap. This instrument retains the classical triple quadrupole scan functions (like selected reaction monitoring, SRM), and it also can be used for sensitive ion trap experiments

The hybrid linear trap orbitrap MS that combines a linear ion trap and high-resolution Orbitrap is one of the tandem mass spectrometers. The LIT uses a set of quadrupole rods to confine ions radially and a static electrical potential on the end electrodes to confine the ions axially. And the Orbitrap consist of an axially-symmetrical mass analyzer and make ions in an orbital motion around the spindle. Then the image current is detected and converted to a mass spectrum by the Fourier transform. This hybrid mass spectrometer is widely used in Proteomics and metabolomics analysis.

At Creative Proteomics, various services are available in a wide range of applications based on different types of mass spectrometry. If you want to know more detailed information, please feel free to contact us.