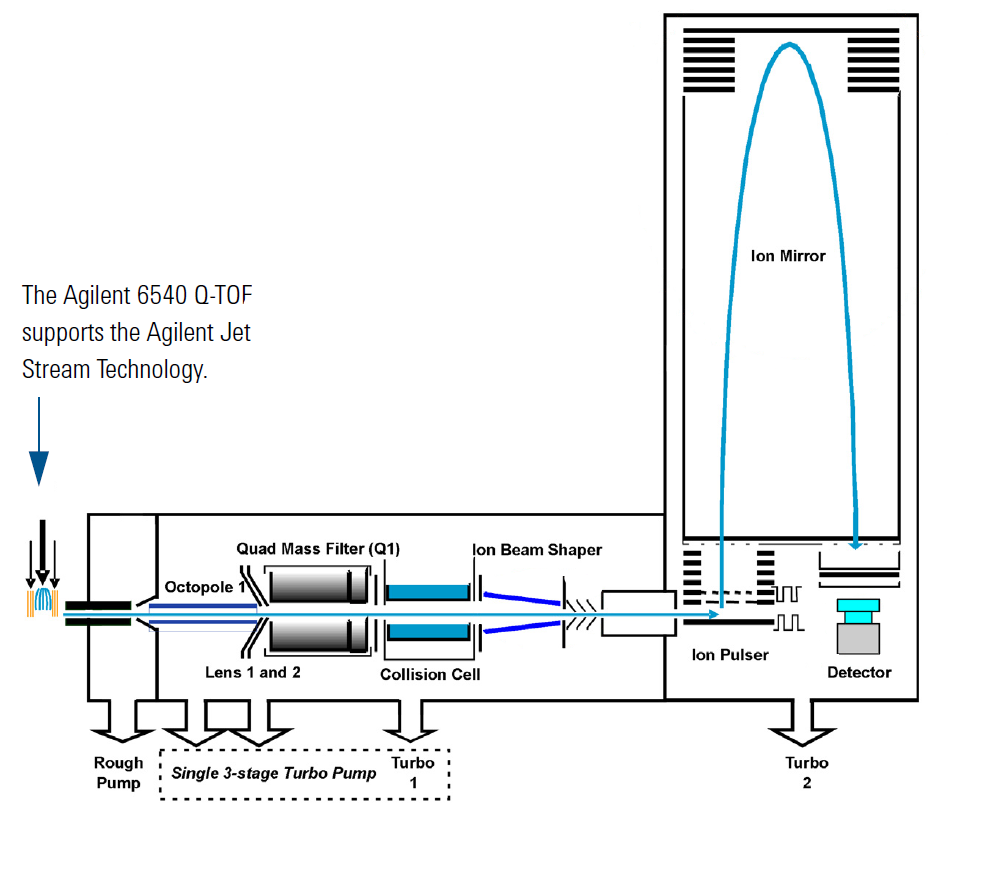 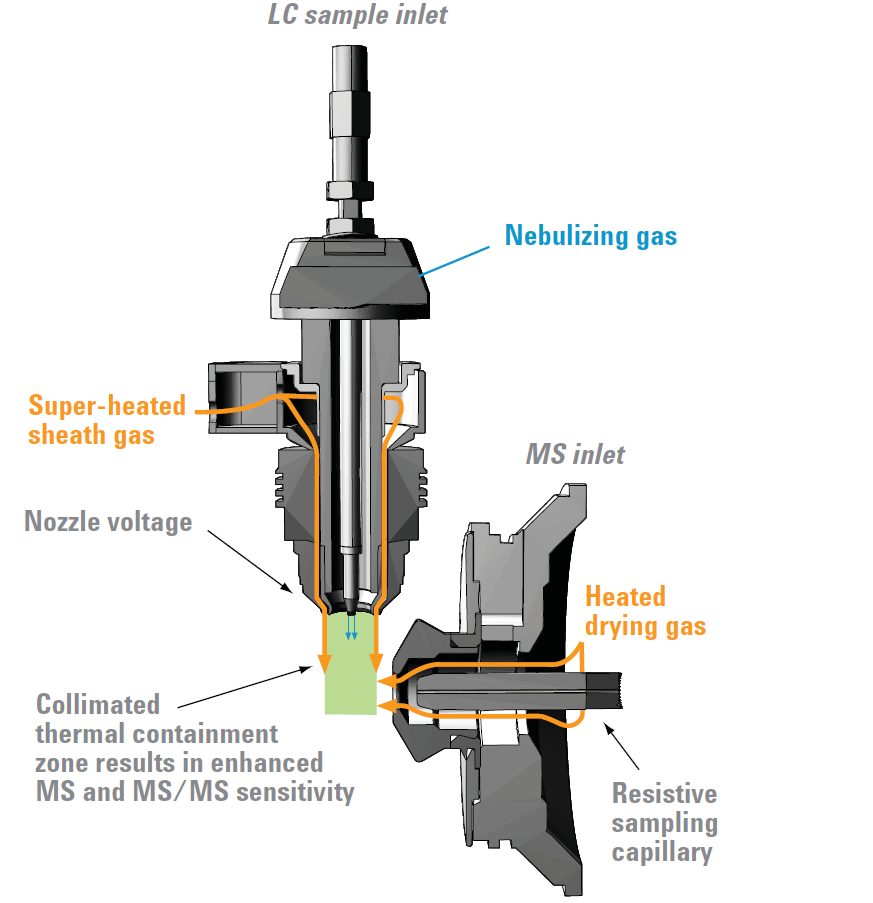 The quadrupole, consisting of four parallel metal rods, works as a mass filter. Only selected m/z ions can pass through the rods while other ions will collide with the rods. The hyperbolic rods can optimize ion transmission and spectral resolution. The end section of the quadrupole also consists of short hyperbolic rods, but their radio frequency (RF) voltages are only high enough to guide ions into the collision cell.

Collision cell, where the selected ions are fragmented, is a high pressure hexapole assembly with its axial acceleration adjusted to maximize sensitivity while eliminating crosstalk. A collision energy voltage is applied over the accelerating linear voltage to generate fragments or product ions. The hexapole assembly is small diameter, helping capture fragmented ions. The geometry of a hexapole offers advantages in ion focusing and ion transmission. The collision cell is comprised of six resistively coated rods that are used to produce a potential difference across the length of the collision cell. In this way, precursor ions or fragment ions are transmitted and not allowed to drift around at random.

The ion beam shaper provides 10-fold compression and cooling to create a denser and thinner ion beam that passes through a narrower slit leading into the slicer and pulser region. To facilitate ion beam shaping, lenses focus the ions, so the ions will enter the TOF analyzer as a parallel beam. The more parallel the ion beam, the higher the resolution in the resulting mass spectrum. 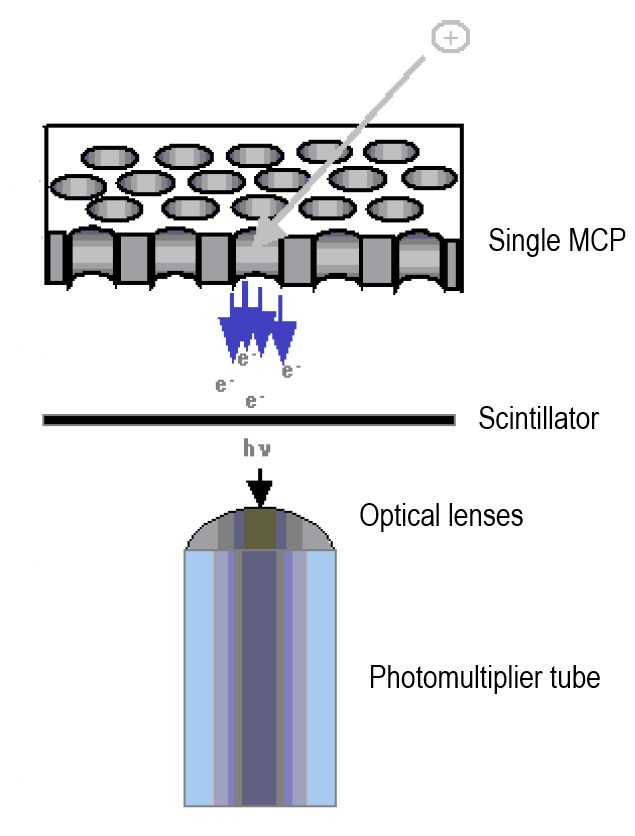 The ion detect contains a microchannel plate (MCP), a scintillator, and a photomultiplier tube (PMT). When ions hit the front surface of the MCP, an electron escapes and begins the process of electrical signal amplification. Then, these ions are focused onto a scintillator that can produce a flash of light when struck by electrons. The light produced by the scintillator passes to the PMT with a signal output at ground potential.

The Principle of Q-TOF Mass Spectrometer

Figure 5. A) Schematic diagram of the quadrupole mass analyzer and B) Reflector TOF analyze

The quadrupole mass analyzer can separate ions according to their mass-to-charge ratios (m/z) by using the stability of the trajectories in oscillating electric fields. As shown in Figure 5A, it consists of four parallel metal rods, and radio frequency (RF) voltage with a DC offset voltage is applied between one pair of rods and the other. It can work as a mass filter to transmit only ions of a selected m/z value to achieve a stable trajectory. Ions with other m/z values collide with the rods or walls and cannot pass the rods.

As shown in Figure 5B, the derivation process clearly reveals that the time of flight of ions varies with the square root of m/z in the linear TOF. Therefore, under the ideal state, the lighter ions will arrive earlier at the detector than the heavier ions. In Agilent 6540 Q-TOF mass spectrometer, the reflectron TOF analyzer, consisting of a series of ring electrodes with high voltage, can correct the kinetic energy distribution in the direction of ion flight and increase resolution. The ions with more energy penetrate deeper into the reflectron, while the less energetic ions of the same m/z penetrate a shorter distance into the reflectron. In that way, the detector receives ions of the same m/z at (about) the same time.

The Quadrupole is under the situation of Total Transmission Ion (TTI), which means all ions can pass the quadrupole. The collision cell does not fragment the ions and works as ion transmission devices. The TOF mass analyzer is in the scan mode and can directly detect the ions. The mass spectrum obtained from the TOF mode is equivalent to the one from the single TOF mass analyzer.

In this mode, the instrument can automatically perform secondary mass spectrometry on qualified ions according to the conditions set by users. When a particular ion or a set of ions meet the set conditions, the quadrupole is in the selected ion monitoring (SIM), and the collision cell can fragment ions. Then the fragment ions can be scanned by TOF and get a mass spectrum. The auto MS/MS mode is commonly used for unknown compounds identification and structure analysis.

In this mode, only the ions targeted by users can get mass spectrum. Similar to the auto MS/MS mode, the quadrupole is in SIM, and the collision cell can fragment ions. Then the fragment ions can be scanned by TOF and get a mass spectrum. This mode is useful for the quantitative analysis, identification of known compounds, and structural elucidation.