Electrospray ionization (ESI) is a technique to generate ions for mass spectrometry using electrospray by applying a high voltage to a liquid to produce an aerosol. Due to relatively fragile biomacromolecules, their structures are easily destroyed during the process of dissociation and ionization. ESI overcomes the tendency of these molecules to fragment upon ionization. ESI differs from other atmospheric pressure ionization processes, in which it may produce multiple charge ions, effectively extending the analyzer's mass range to accommodate the magnitude of kDa-mDa observed by proteins and their associated peptides.

The Principle of Electrospray Ionization

ESI applies a high voltage at the outlet of the capillary, and the high electric field generated atomizes the liquid flowing out of the capillary into tiny charged droplets. As the solvent evaporates, the charge intensity on the surface of the droplet gradually increases, and finally the droplet splits into one or a plurality of charged ions, allowing the analyte to enter the gas phase in the form of a single charge or multiple charges and become a gas phase ion.

There are two explanations for the mechanism of gas phase ion generation: the ion evaporation model (IEM) proposed by Thomsona and lribarne, and the charged residue model (CRM) advocated by Dole and Rllgen. In the two models, the ions to be analyzed are not excited by external energy and do not generate debris during the process of becoming a gas phase ion.

The Process of Electrospray Ionization 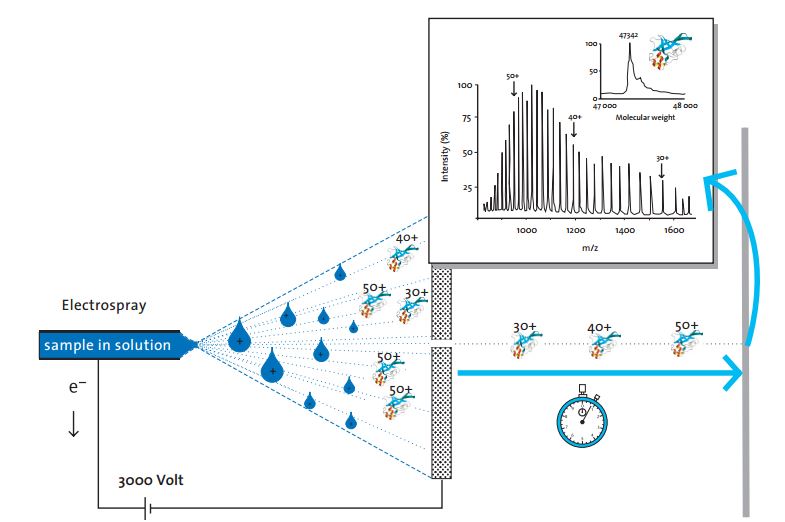 Advantages and Disadvantages of Electrospray Ionization

As a new type of soft ionization technology, ESI has been widely used in many fields. Although this technology makes up for shortcomings of some traditional mass spectrometry techniques, it still has some drawbacks.

ESI, a soft ionization technology, solves the problem of high polarity, ionization of thermally unstable proteins, and determination of the molecular mass of macromolecular organisms. Moreover, ESI has significantly improved sensitivity, accuracy, and complexity of analytical mixtures over previous mass spectrometry techniques, broadening the application of mass spectrometry in the protein field.

ESI is a soft ionization method, which promotes the widespread use of the ESI source in mass spectrometry. Even compounds with large molecular weight and poor stability will not decompose during ionization.