As an important contributor to dietary protein, meat intake in human has a significant impact on a large number of nutritional and health outcomes. The high consumption of meat in the developed world is an important contributor to cardiovascular disease (CVD) risk because of the large content of saturated fats and cholesterol in meat. However, no association between dietary saturated fat intake and CVD was shown in recent meta-analysis of prospective cohort studies. Therefore, it is suggested that the cholesterol and saturated fat content of red meat may not be sufficient to responsible for the increased CVD risk. This suspicion has stimulated investigation of high salt content, or heterocyclic compounds generated during cooking, which are alternative disease-promoting exposures responsible for increased CVD risk. As a result numerous studies throughout the years, the following metabolites are regarded as biomarkers of meat intake: creatinine, creatine, carnitine, carnosine, taurine, 1-methylhistidine and 3-methylhistidine and TMAO. A recent study showed that in conjunction with taurine and creatinine, 3-methylhistidine and 1-methylhistidine are also regarded as biomarkers of meat intake. 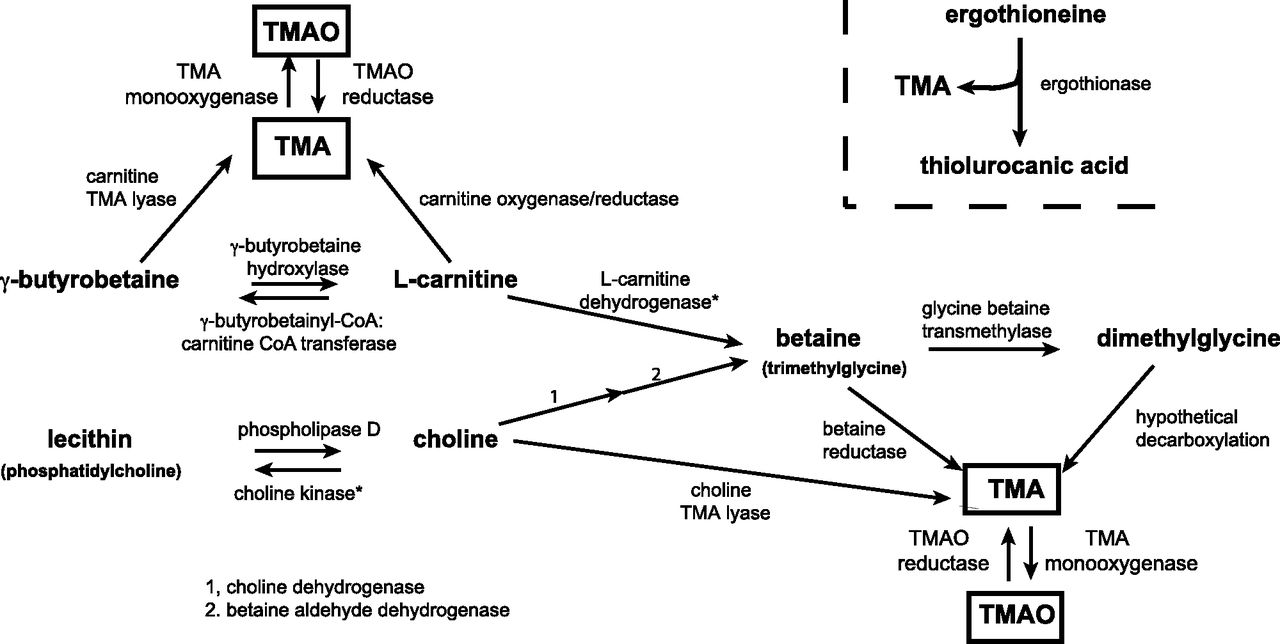 As a trimethylamine and part of the head group of phosphatidylcholine, metabolized by gut microbiota, choline converts to trimethylamine (TMA). Catalyzed by hepatic flavinmonooxygenases, TMA is rapidly oxidized to generate trimethylamine-N-oxide (TMAO), which is proatherogenic and associated with cardiovascular risks. It is confirmed in a large cohort that TMAO is a predictor of cardiovascular risk. It is also supposed that other dietary nutrients with a trimethylamine structure may also generate TMAO from gut microbiota and accelerate atherosclerosis. As a compound with trimethylamine structure abundant in red meat, L-carnitine is another excellent substrate for gut flora to produce TMA and then converts to TMAO. However, the specific microbial species responsible for TMAO formation and mechanism of accelerated atherosclerosis by TMAO remains unknown. The mechanism maybe that, by increasing the expression of proatherogenic scavenger receptors CD36 and scavenger receptor A on macrophage cell surface, TMAO inhibits reverse cholesterol transport and induces foam cell formation. Two main bacterial phyla among intestinal flora, Bacteroidetes and Firmicutes may be associated with TMA formation. Therefore, alteration of gut flora composition with microbial faecal transplantation may be an appealing approach to prevent or inhibit atherosclerosis. In some studies, oral broad-spectrum antibiotics are also administered in mice and humans have been investigated for the same purpose to alter gut flora composition.

Creative Proteomics has established a robust, reproducible and highly sensitive HPLC-MS platform for the simultaneous quantification of meat markers.