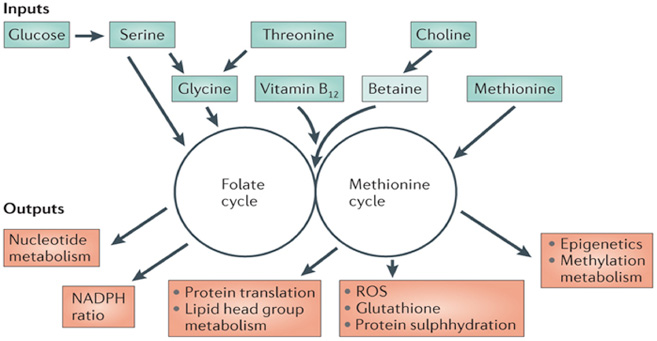 Because of their relations to numerous diseases and abnormal physiological conditions range from birth to senescence, there is an increasing interest in one-carbon metabolism. Though the mechanism and the responsible metabolic pathway for the initiation and progression of one-carbon metabolism remain to be determined, impairments in folate-mediated one-carbon metabolism are associated with several common diseases and developmental anomalies including vascular disease, intestinal cancers, neural tube defects and cognitive decline. It is shown that folate deficiency plays a role in the development of neural tube defects. Other birth defects and adverse pregnancy outcomes are also shown to have something to do with the folate status. Folate deficiencies are primary causes of megaloblastic anemia. At the same time, abnormal folate status and high homocysteine level are considered to be the risk factors of colorectal cancer, depression, impaired cognitive function, cardiovascular diseases and other malignancies. While in vitro experiments indicate that high homocysteine may lead to vascular lesion, some but not all studies suggest that vascular dysfunction is at least partly due to accumulation of ADMA. Likewise, in one study, supplementation with folic acid or vitamin B12 could enhance cognition in the elderly.