It is now well established that deficiencies of the major dietary sources of methyl donors, methionine and choline, lead to the formation of liver cancer in rodents. Although not so widely studied as the liver tumors, extrahepatic tumor formation has also been increased in carcinogen-treated animals fed diets low in the methyl donors methionine, choline, and folic acid. Several plausible mechanisms have been proposed to explain the enhancing effects of dietary methyl deprivation on carcinogenesis. The most widely investigated, however, has been the idea that dietary methyl insufficiency results in abnormal DNA methylation subsequent to the formation of a physiological methyl insufficiency in vivo. A critical metabolite in the investigation of this hypothesis is SAM, the body’s chief physiological methyl donor. 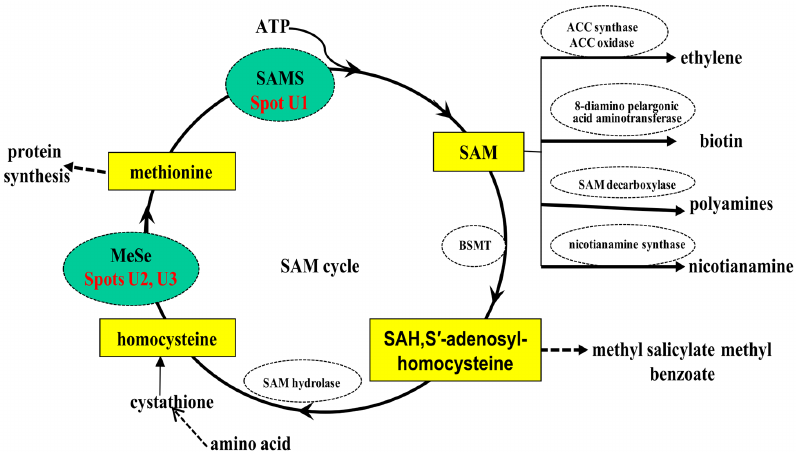 Donation of the SAM methyl group converts SAM into SAH, the latter being a potent inhibitor of methylation. For this reason, the SAM/SAH ratio has been used as an index of methylation potential in a cell. SAH in plasma has been found to be a more sensitive indicator for vascular disease risk than homocysteine. In addition, distinct classes of riboswitches that recognize SAH but not SAH and regulate gene expression have been discovered.

During the past decade, animal models of several disorders of homocysteine metabolism became available for studying the pathogenesis of the respective enzyme deficiencies. In contrast to human patients the animal models offer a unique opportunity to determine concentration of relevant metabolites including SAM and SAH also in tissues, which may help further elucidating the pathogenetic mechanisms in homocystinurias. The aim of this study was to develop an assay to monitor the levels of SAM and SAH in animal tissue samples and to explore the preanalytical conditions for this assay.

Currently, a reliable and reproducible method using highly sensitive HPLC-MS platform for the rapid identification and quantification of SAM and SAH in different sample types has been established by the experienced scientists at Creative Proteomics, which can satisfy the needs of academic and industrial study in your lab.