Choline is found in various forms in humans and animals. The water-soluble choline metabolites include acetylcholine (ACho), an important neurotransmitter for brain and neuromuscular function, betaine (Bet), an oxidative intermediate of choline which supplies a methyl group for the conversion of homocysteine to methionine, and glycerophosphocholine (GPCho), which like Bet acts as an organic osmolyte in cells. The lipid-soluble choline-containing metabolites phosphatidylcholine (PC), sphingomyelin (SM), and lysophosphatidylcholine (LPC) are all structural components of mammalian membranes. PC is essential for synthesis of VLDL, a key mechanism to export triacylglycerol from the liver. 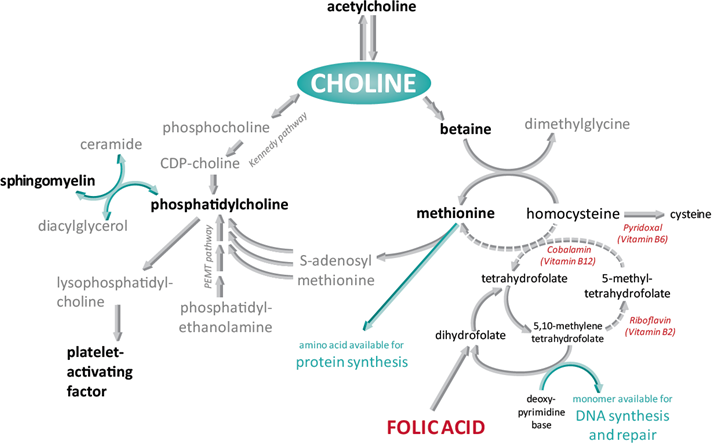 Figure. Metabolism of choline and its metabolites.

Choline can be obtained from the diet and from endogenous biosynthesis that predominantly occurs in the liver via the phosphatidylethanolamine N-methyltransferase (PEMT) pathway. Although the PEMT pathway represents an important source of choline, dietary intake of choline is necessary because the pathway supplies insufficient choline moiety to maintain the normal function of cells, tissues and organs. In the case of the ruminant, however, dietary choline is extensively degraded (>80%) by rumen bacteria and therefore endogenous synthesis via the PEMT pathway represents a critical source of choline. For the lactating dairy cow, the periparturient period is characterized by a high incidence of fatty liver disease and supplementation of rumen-protected choline has been found to reduce the extent of hepatic fatty infiltration and increase expression of genes involved in VLDL transport.

Despite the lack of dietary-derived choline in the ruminant, milk and dairy products are important sources of choline in the human diet. One cup of retail milk (2% fat) is expected to provide approximately 40 mg choline, which represents nearly 10% of an adult woman’s daily choline requirement. In addition, bovine milk is the main ingredient used in the manufacture of infant formula, which is used during a period of human development where choline requirements are high for organ growth and membrane biosynthesis. Studies that have compared the choline content of breast milk and infant formula have found that whilst the total choline in breast milk was relatively constant, choline in bovine derived infant formula varied by over 7-fold. Further, these studies have found the proportion of the various choline metabolites in milk differs for breast milk and infant formula, which may be important for the neonate as the bioavailability of the choline metabolites can vary considerably. Despite the variation in choline content and choline metabolite proportions of bovine-derived infant formula, it is not known to what extent this variation may be attributed to the milk initially harvested from cows or due to post-harvest processing.

Lactation is characterized by extensive physiological adaptations that are coordinated to provide the appropriate quantity and pattern of nutrients for milk synthesis. These adaptations have been associated with changes in choline metabolism, with differences in choline metabolite concentrations during lactation reported in breast milk and porcine milk. However, there has not been a systematic evaluation of changes in choline metabolites in plasma and milk during lactation in dairy cows. In Creative Proteomics, a method based on liquid chromatography-tandem MS (LC-MS/MS) was developed and validated to identify and quantify all of the major choline containing compounds as well as their fatty acid composition within a phospholipid class.

Choline and Choline Metabolites Quantified in This Service