Glycosphingolipids (GSLs) are ubiquitous components of eukaryotic cell membranes. GSLs are synthesized by sequential addition of saccharides to the hydroxyl group at the C-1 position of the ceramide (Cer) backbone. GSLs are mainly located in the extracellular leaflet of the plasma membrane, where they are involved in several functions such as cell-to-cell interaction and recognition. Glucosylceramide (GlcCer), one of the simplest GSLs, is widely distributed in mammalian tissues. GlcCer is formed at the cytosolic leaflet of Golgi apparatus by glycosylation of Cer by GlcCer synthase (GCS). After its synthesis, GlcCer is transported to the luminal side of the Golgi apparatus where is converted into more complex GSLs, or transported by FAPP2 (4-phosphate adaptor protein-2) to the cytoplasmic leaflet of the plasma membrane (PM) or of the endoplasmic reticulum (ER). In the PM, GlcCer may remain on the cytoplasmic leaflet or translocate to the cell surface. 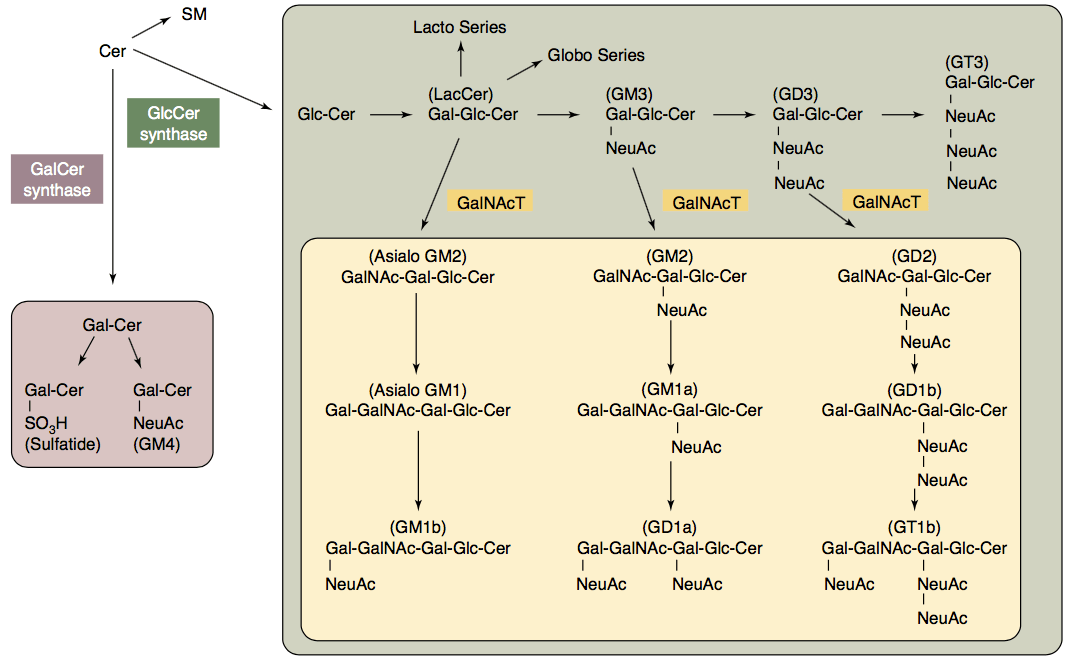 GlcCer is an important intracellular messenger that plays key roles in cell maintenance and regulation. However, the molecular mechanisms by which GlcCer regulates cellular processes are unknown. GSLs are thought to be involved in the formation of lipid rafts, which, because of their specific biophysical properties, can act as signaling platforms. In the last decade, much effort has been made to understand the biophysical properties of lipid rafts; however, little attention has been given to GlcCer. GlcCer has a high main transition temperature (Tm) and a complex thermotropic phase behavior, with multiple transitions between different stable and metastable phases. Due to their high Tm and extensive hydrogen-bond network, GSLs with small uncharged headgroups are expected to segregate from low Tm phospholipids and form tightly packed domains, with a higher packing density than sphingomyelin with a similar backbone. These observations suggest that GlcCer might promote similar changes to those induced by Cer in the biophysical properties of fluid membranes. Previous studies from our group have showed that Cer has a complex phase behavior promoting extensive alterations in the biophysical properties of membranes that are dependent both on Cer content and membrane lipid composition, particularly on cholesterol (Chol) content. 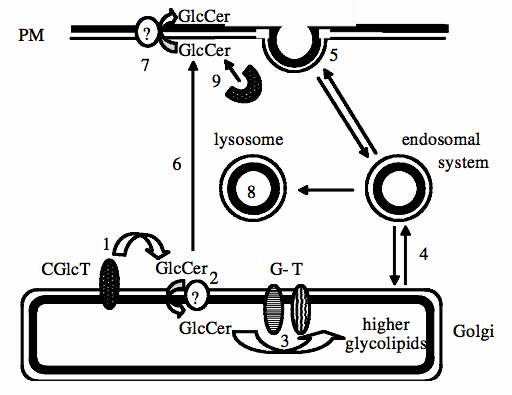 GlcCer is required for the vesicular pathway from the Golgi complex to the melanosome. As this pathway involves the budding of carrier vesicles from the trans-Golgi network or from an organelle intermediate between the trans-Golgi network and the melanosome, the simplest mechanism would be that GlcCer is required for the formation of a functional protein coat on the cytosolic surface of these membranes. After budding and transportation to the melanosome the active lipid GlcCer might be removed from the cytosolic surface by a translocator, which would make the process unidirectional. A defect in this machinery may lie at the basis of some forms of the Hermansky–Pudlak syndrome, a group of related recessively inherited human pigmentation disorders, as has already been demonstrated for the AP-3 complex. Finally, melanosomes are part of the endosomal membrane system. It will be interesting to see the consequences of the absence of glycosphingolipids on the structure and function of endosomes in regular cells that do not make pigment.