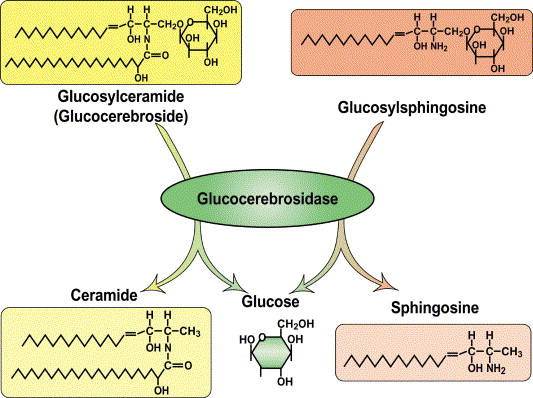 More recently, Sidransky and colleagues reexamined glucosylsphingosine levels in relation to various variants of Gaucher disease. Over the years it has been repeatedly proposed that elevated glucosylsphingosine may underlie some clinical symptoms. For example, recent investigations with cultured osteoblasts of a type 1 Gaucher disease–like mouse model led to the hypothesis that glucosylsphingosine may actively contribute to low bone mineral density by interfering with normal osteoblast function, possibly by altered intracellular calcium homeostasis. In addition, a role for glucosylsphingosine in neurologic symptoms of Gaucher patients has been frequently proposed. Importantly, increased concentrations of other lysoglycosphingolipids have been documented for other lysosomal sphingolipidoses as well, such as galactosylsphingosine (psychosine) in Krabbe disease, and globotriaosylsphingosine (lysoGb3) in Fabry disease, each presumed to play an active role in disease related pathology.

Given the potential biologic significance of glucosylsphingosine, a successful development of a sensitive quantitative detection method is needed. Creative Proteomics provides fast and effective method for quantification of glucosylsphingosine that can satisfy the needs of academic and industrial study in your lab.