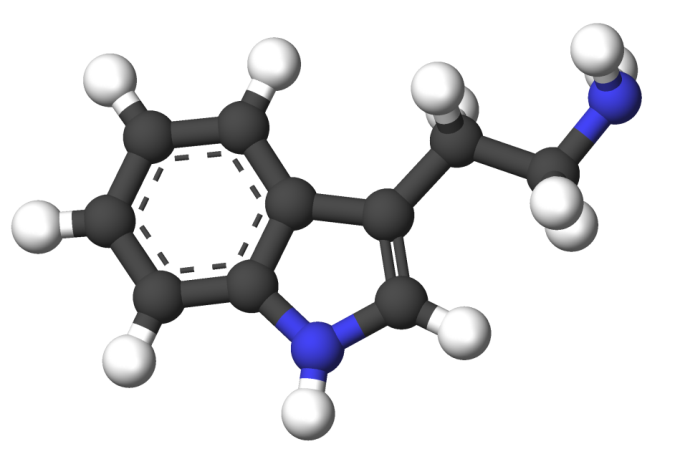 Tryptamine is a kind of monoamine alkaloid, which contains an  indole ring structure, and the structure is similar to the amino acid  tryptophan. Tryptamine is reported  in trace amounts in the brains of mammals, and the concentration of Tryptamine in rat brains is about 3.5  pmol/g. The function of is Tryptamine in brain is hypothesized to play a role as a neuromodulator or  neurotransmitter. Tryptamine is one  of common functional group in a set of compounds termed substituted Tryptamines collectively, which  includes many biologically activecompounds, for example neurotransmitters and  psychedelic drugs.

Small amounts of Tryptamine is also can be found in Many plants, and it is a feedstock for the metabolic  pathways which influence plant growth and microbiome.For example, it is  reported can be as a possible intermediate in in one biosynthetic pathway for  one of plant hormone- indole-3-acetic acid. Higher concentrations can be found in many Acacia species. In vertebrates, Tryptamine acts as a non-selective  serotonin receptor agonist and serotonin-norepinephrine-dopamine releasing  agent (SNDRA), which has a preference for evoking serotonin and dopamine  release over norepinephrine release. Tryptamine has a very short half-life in vivo because it is rapidly metabolized by MAO-A  and MAO-B. Tryptamine also is  reported as a noncompetitive inhibitor for serotonin N-acetyltransferase  (SNAT), which catalyzes the anabolic metabolism of serotonin into  N-acetylserotonin, neuromodulator and the immediate precursor for melatonin in  mosquitoes.

Method
Biogenic  amines of Tryptamine in a lot of  biological samples were detected by High-Performance Liquid Chromatography (HPLC), using precolumn derivatization  with DNS-Cl. This Methodology provides accurate, reliable, and reproducible  results of Tryptamine measurement,  which enables us to analyze of Tryptamine levels in vitro and in vivo.