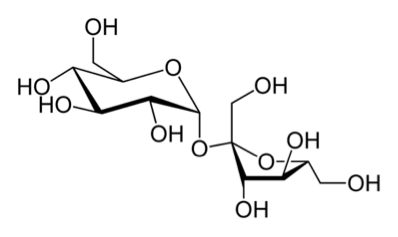 Sucrose is also named as saccharose, which is an obsolete name for sugars in general. Sucrose is a kind of carbohydrate and is found in many plants and plant parts. The chemical molecular formula of Sucrose is C12H22O11 and is hard, white, odorless crystals, lumps, or powder. Sucrose tastes sweet and very soluble in water, methanol, slightly soluble in ethanol, insoluble in ethyl ether. Sucrose was named by William Miller, who is an English chemist in 1857 and the word "Sucrose" comes from the French sucre.

Sucrose is present in many plants, especially in their roots, fruits and nectars naturally due to Sucrose can be used to store energy, which is important for the development of the plants. Sucrose accumulated in plants is the main food source for many mammals, birds, insects and bacteria. Honeybees are very important for humans due to their ability to accumulate Sucrose accompanying with honey, which is an especially key foodstuff according the consumption perspective of humans. The carbohydrates in honey are fructose, glucose and little amounts of Sucrose only. The Sucrose content in the fruits ripen rises sharply in general because the accumulation of photosynthesis, which is a process used by plants and other organisms to convert light energy into chemical energy and then is stored in carbohydrate molecules.

Method
High-Performance Liquid Chromatography (HPLC) using a differential refractive index detector (RID) for the determination of Sucrose levels in a lot of biological samples. This Methodology provides accurate, reliable, and reproducible results of Sucrose measurement, which enables us to analyze of Sucrose levels in vitro and in vivo.