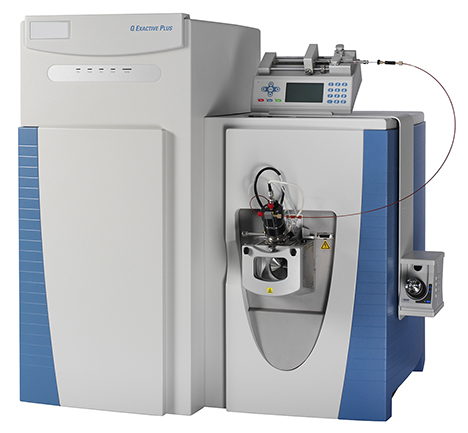 The Structure of the Q Exactive Plus Mass Spectrometer

Figure 2. Schematic of the Q Exactive Plus mass spectrometer

The injection flatapole acts as an ion focusing device and also an ion pre-filtering device. To focus the ions along the axis of the lens, an RF voltage is applied to the electrodes. In addition, a DC voltage is applied to the injection flatapole. In positive ion mode, this voltage creates a negative potential difference with respect to the S-lens exit lens. While in negative ion mode, this voltage difference is inverted. In ion pre-filtering mode, additional DC voltages (of opposite sign but equal magnitude) are applied to opposite sets of electrodes to coarsely filter ions falling outside of a wide window around the much narrower window of ions passed by the quadrupole. For quadrupole mass filter, the Q Exactive Plus MS uses advanced quadrupole technology (AQT), which comprises a hyperbolic segmented quadrupole for higher transmission efficiency and optimized transmission window shape.

In Q Exactive Plus mass spectrometer, after samples are introduced into the API source, the injection flatapole transmits ions into the quadrupole. In addition, the injection flatapole also work as coarse pre-filtering of ions according to their mass-to-charge (m/z) ratios. The quadrupole rod can transmit and filter the ions according to m/z ratios. And then ions are transferred into the C-trap, where the ions are accumulated and their energy is dampened with a bath gas. The ions are then injected into the Orbitrap analyzer to obtain mass spectra. Besides, to conduct MS/MS experiment or all-ion fragmentation (AIF), the ions are passed through the C-Trap into the HCD cell for fragmentation. After fragmentation, the ions are transferred back into the C-Trap and injected into the Orbitrap analyzer for detection. 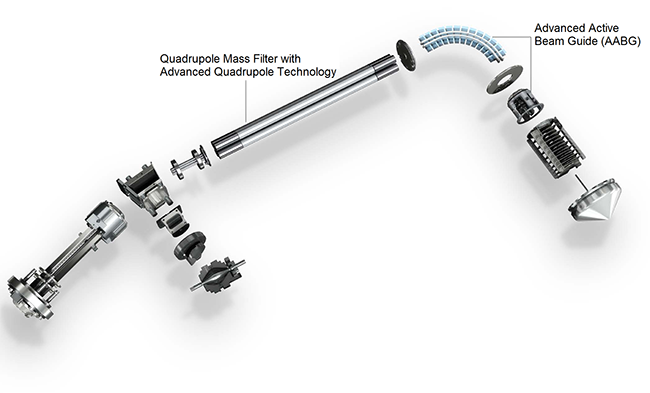 The Q Exactive Plus mass spectrometer accelerates a wide range of applications.

The Q Exactive Plus mass spectrometer combines the quadrupole precursor selection with HR/AM Orbitrap to provide identification and quantitation of more compounds with greater confidence. At Creative Proteomics, we can provide the reliable services to meet a variety of requirements by using the Thermo Scientific Q Exactive Plus hybrid quadrupole Orbitrap mass spectrometer.