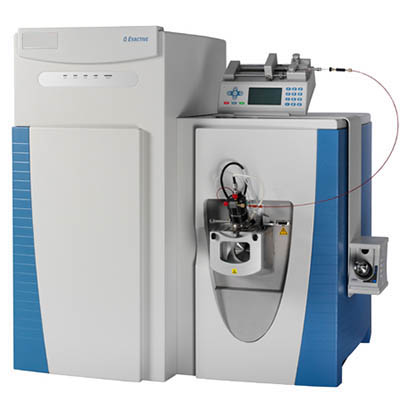 As shown in Figure 2, the Q Exactive hybrid quadrupole-Orbitrap mass spectrometer mainly includes an ion source, a stacked-ring ion guide (S-lens), a quadrupole mass filter, a curved linear trap (C-trap), a Higher Energy Collisional Dissociation (HCD) cell, and an Orbitrap mass analyzer. Samples can be introduced into the ion source by various methods. And the injection flatapole transmits ions from the source to the quadrupole. The quadrupole rod assembly works as ion transmission device with the possibility to filter the transmitted ion according to its mass-to-charge ratios. The ions are transferred into the C-Trap and then injected into the Orbitrap mass analyzer to get mass spectra. In addition, ions are passed through the C-Trap into the HCD cell and conduct MS/MS experiments in combination with the quadrupole mass filter. 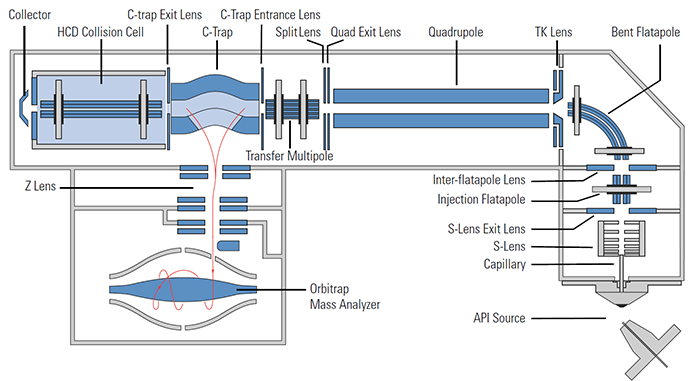 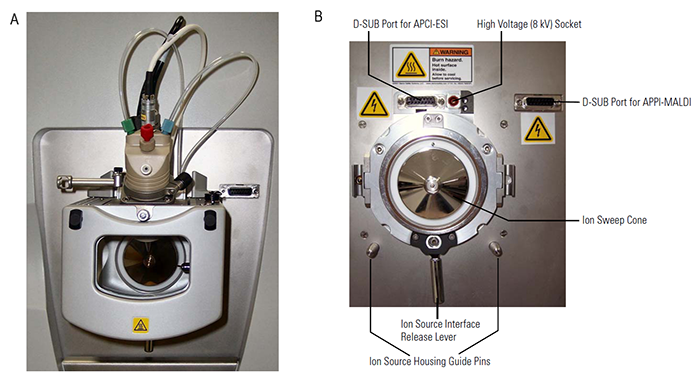 In Q Exactive, the atmospheric pressure ionization (API) source can form gas phase sample ions and serve as the interface between liquid chromatography (LC) and the MS. The API source consists of the Ion Max ion source and the ion source interface. The Ion Max ion source can be configured to different API modes, including atmospheric pressure chemical ionization (APCI), atmospheric pressure photoionization (APPI), and electrospray ionization (ESI). The NSI model is available by using a separate nanospray ionization (NSI) probe. By using ion source mount on the front side, the ESI, APCI, and APPI probes can be interchanged without using tools. The ion source interface includes an ion transfer capillary (assists in desolvating ions), two cartridge heaters, a heater block, a platinum probe sensor, a vent prevent ball (preventing air from entering the vacuum manifold), an ion sweep cone (channels the sweep gas towards the entrance of the tube), a tube lens, and a skimmer.

The ion optics focuses the ions produced in the ion source and transmit the ions to the C-trap. The injection flatapole, a square array of flat metal electrodes, acts as an ion focusing device. The bent flatapole which transmits ions through a 90° arc from the injection flatapole to the quadrupole removes the neutral gas jet and solvent droplets. The combination of inner and outer Turner-Kruger (TK lens) focuses the ion beam into the quadrupole and acts as vacuum baffle between bent flatapole and quadrupole. The quad exit lens focuses the ions coming from the quadrupole into the transfer multipole which acts as another transmission device. And the split lens is used to start and stop the injection of ions into the mass analyzer. S-lens in the source region increases the transmission of ions into the Q Exactive instrument, increases the scan rate by reducing the ion injection time, or increases sensitivity by injecting more ions in those instances when the ion injection time has reached its maximum (max ion time).

The quadrupole, a square array of hyperbolic-profile round rods, is located between the TK lens and the transfer multipole. In the quadrupole, the opposite rods in the array are connected electrically. RF and DC voltages are applied to the rods. Voltages of the same amplitude and sign are applied to the rods of each pair, but the voltages applied to the different rod pairs have equal amplitude but opposite sign. The RF-to-DC-voltage ratios and their values determine the range of mass-to-charge ratio (m/z) ratios to be transmitted through the quadrupole mass filter. For each injection, controlled by the split lens, the quad RF amplitude and DC voltage are set to fixed values. Under these conditions, only ions of a certain range of m/z ratios are maintained within bounded oscillations as their velocity carries them through the mass filter.

The ions entering the C-trap can lose their kinetic energy by collisions with nitrogen collision gas (bath gas) to prevent them from leaving the C-Trap through the gate. The nitrogen collision gas is utilized for dissipating the kinetic energy of injected ions and for cooling them down to the axis of the C-Trap. Voltages on the end apertures of the C-Trap (entrance and exit apertures) are elevated to provide a potential well along its axis. These voltages may be later ramped up to squeeze ions into a shorter thread along this axis.

The sample ions can be passed through the C-trap into the HCD collision cell which consists of a straight multipole mounted inside a metal tube. The front of the tube is equipped with a lens for tuning transmission and ejection to or from the C-Trap. A potential gradient is applied to the collision cell to provide fast extraction of ions. The fragment spectra generated in the HCD cell and detected in the Orbitrap show a fragmentation pattern comparable to the pattern of typical triple quadrupole spectra. 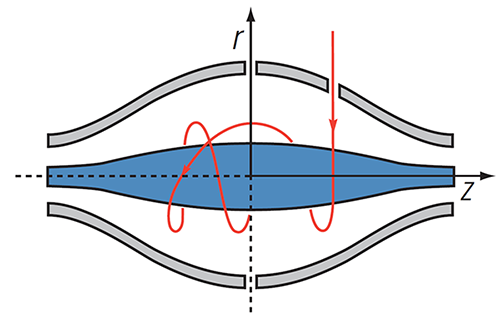 Figure 4. Schematic view of the Orbitrap and an example of a stable ion trajectory

The heart of Orbitrap mass analyzer is an axially-symmetrical mass analyzer, which consists of a spindle-shape central electrode surrounded by a pair of bell-shaped outer electrodes. As shown in Figure 4, in the Orbitrap mass analyzer, stable ion trajectories combine rotation around an axial central electrode with harmonic oscillations along it. The frequency of these harmonic oscillations along the z-axis depends only on the ion’s m/z and the instrument. After ions of all m/z are extracted to the mass analyzer and image current detection takes place. Two split halves of the outer electrode detect the image current produced by the oscillating ions. The instrument obtains the frequencies of these axial oscillations and therefore the m/z of the ions through Fourier Transformation.

The Q Exactive mass spectrometer with the accuracy and confidence of Orbitrap technology can eliminate interferences. For metabolites structural identification, it is a great choice for providing MS/MS sensitivity and greater confidence. In addition, the Q Exactive, with fast scan-to-scan polarity switching, maximizes metabolite detection and identification from a single chromatographic run. The Q Exactive with high mass resolution and fast polarity switching to find more endogenous metabolites is an ideal tool for large-scale metabolomics profiling.

The Q Exactive MS with HCD generates more fragmentation and higher quality mass spectra to improve identification compared to CID, which is accessible for proteomics research. The instrument provides robust and easy-to-use HR/AM capabilities for quantitative and qualitative proteomics applications. In addition, there is a range of softwares, such as Thermo Scientific Proteome Discoverer, SIEVE software, and Pinpoint software for supporting the proteomics research.

The Q Exactive LC-MS/MS combines the SRM and HRAM Orbitrap technology, making it possible for the clinical research and forensic toxicology. This instrument can be used for quantitative targeted analysis of testosterone in plasma, urine, and oral fluids. In addition, Q Exactive mass spectrometer can be employed for the quantitation of endogenous steroids or similar molecules in body fluids.