In humans and mammals, almost 80% of the nitrogen excreted is in the form of urea, which is produced through a series of reactions occurring in the cytosol and mitochondrial matrix of liver cells. These reactions are collectively called the urea cycle or the Krebs-Henseleit cycle. Ammonia is a toxic product of nitrogen metabolism that should be removed from our body. The urea cycle converts excess ammonia into urea in the mitochondria of liver cells. The urea forms, then enters the blood stream, is filtered by the kidneys and is ultimately excreted in the urine. 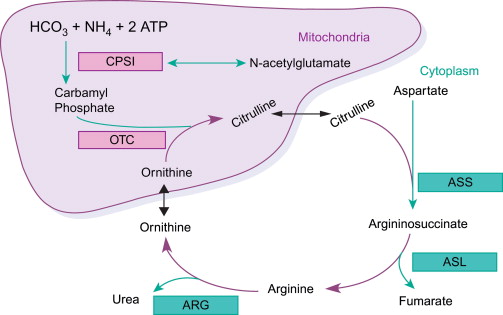 The synthesis of carbamoyl phosphate and the urea cycle are dependent on the presence of NAcGlu, which allosterically activates CPS1. NAcGlu is an obligate activator of carbamoyl phosphate synthetase. Synthesis of NAcGlu by NAGS is stimulated by both Arg, allosteric stimulator of NAGS, and Glu, a product in the transamination reactions and one of NAGS's substrates, both of which elevated when free amino acids are elevated. So Glu not only is a substrate for NAGS but also serves as an activator for the urea cycle.

The remaining enzymes of the urea cycle are controlled by the concentrations of their substrates. Thus, inherited deficiencies in cycle enzymes other than ARG1 do not result in significant decreases in urea production (if any cycle enzyme is entirely missing, death occurs shortly after birth). Rather, the deficient enzyme's substrate builds up, increasing the rate of the deficient reaction to normal.

The main purpose of the urea cycle is to eliminate toxic ammonia from the body. About 10 to 20 g of ammonia is removed from the body of a healthy adult every day. A dysfunctional urea cycle would mean excess amount of ammonia in the body, which can lead to hyperammonemia and related diseases. The deficiency of one or more of the key enzymes catalyzing various reactions in the urea cycle can cause disorders related to the cycle. Defects in the urea cycle can cause vomiting, coma and convulsions in newborn babies. This is often misdiagnosed as septicemia and treated with antibiotics in vain. Even 1mm of excess ammonia can cause severe and irreversible damages.