Sulfatide synthesis begins with a reaction between UDP-galactose and 2-hydroxylated or non-hydroxylated ceramide. This reaction is catalyzed by galactosyltransferase (CGT), where galactose is transferred to 2-hydroxylated, or non-hydroxylated ceramide, from UDP-galactose. This reaction occurs in the luminal leaflet of the endoplasmic reticulum, and its final product is GalCer, or galactocerebroside, which is then transported to the Golgi apparatus. Here, GalCer reacts with 3’-phosphoadenosine-5’-phosphosulfate (PAPS) to make sulfatide. This reaction is catalyzed by cerebroside sulfotransferase (CST). CST is a homodimeric protein that is found in the Golgi apparatus. It has been demonstrated that mice models lacking CST, CGT, or both are incapable of producing sulfatide indicating that CST and CGT are necessary components of sulfatide synthesis. 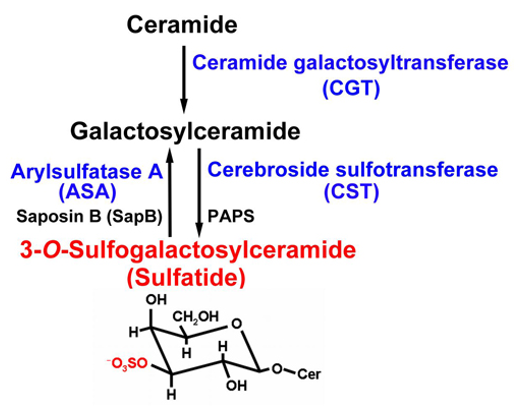