Metabolism in living matter may be described as a large group of enzyme-controlled and regulated chemical reactions that produce energy in the form of ATP, produce substances needed for growth and the development of tissues, and help the organism to survive in different circumstances. Depending on the biosynthetic origin, general occurrence and biochemical role of the compounds produced in metabolism, they are called either primary or secondary metabolites. Primary metabolic routes produce primary metabolites, which are present almost everywhere in nature and are essential for all life forms. The secondary metabolites are of more limited occurrence. While some do not have a proven function in the organism, others apparently play a vital role. Some secondary metabolites of plants are found only in certain species of families, showing the individuality of species. Their production may also vary with conditions: the environment of the organism or the available nutrition. They may have a role in providing defense against pest and pathogens, providing protection against UV radiation and stress, or acting as attractive volatile odor compounds or pigments. Reactions involving secondary metabolites produce an enormous selection of compounds, some of them substances that may be pharmacologically active in humans and useful as medicines or food additives. Some famous examples of secondary plant metabolites with pharmacological activities are the analgesic and antipyretic compound salicin isolated from willow (Salix species) and used as a template for the synthesis of acetylsalisylic acid (aspirin), the anticancer drug taxol isolated from Pacific yew (Taxus brevifolia) and the strongly analgesic, narcotic, and addictive compound morphine isolated from opium (Papaver somniferum).

The pathways for modifying and synthesizing carbohydrates, proteins, fats and nucleic acids are the same in all organisms, apart from minor variations. Also, the biosynthesis of most secondary metabolites begins from a relatively small group of compounds, which are modified into an unlimited number of compounds through various synthesis pathways. The most important of these metabolic pathways are those with acetyl coenzyme A (acetyl-CoA), shikimic acid, or mevalonic acid intermediates, and known as the acetate, shikimate, and mevalonate pathways, respectively. These key intermediates are formed from products of the glycolytic pathway or their intermediates. In addition to these key intermediates, a wide variety of antibiotics, peptides, proteins, and alkaloids are formed from amino acids derived from acetyl-CoA via citric acid (Krebs) cycle, or via the shikimate pathway. 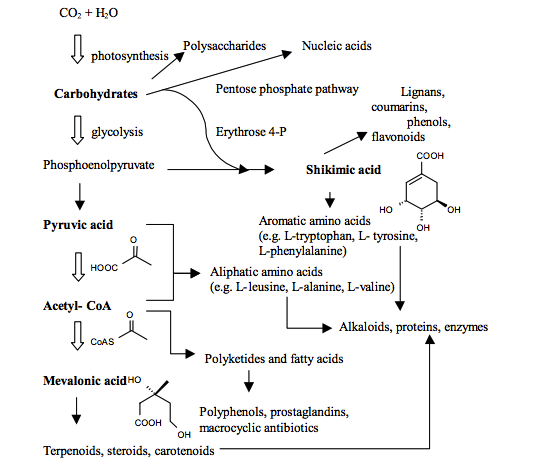 The apparent lack of primary function in the plant, combined with the observation that many secondary metabolites have specific negative impacts on other organisms such as herbivores and pathogens, leads to the hypothesis that they have evolved because of their protective value. Many secondary metabolites are toxic or repellant to herbivores and microbes and help defend plants producing them. Production increases when a plant is attacked by herbivores or pathogens. Some compounds are released into the air when plants are attacked by insects; these compounds attract parasites and predators that kill the herbivores. Recent research is identifying more and more primary roles for these chemicals in plants, as signals, antioxidants, and other functions. Secondary chemicals are important in plant use by humans. Most pharmaceuticals are based on plant chemical structures, and secondary metabolites are widely used for recreation and stimulation (the alkaloids nicotine and cocaine; the terpene cannabinol). The study of such plant use is called ethnopharmacology. Psychoactive plant chemicals are central to some religions, and flavors of secondary compounds shape our food preferences. The characteristic flavors and aroma of cabbage and relatives are caused by nitrogen-and sulfur-containing chemicals, glucosinolates, which protect these plants from many enemies. The astringency of wine and chocolate derives from tannins. The use of spices and other seasonings developed from their combined uses as preservatives (since they are antibiotic) and flavorings.

Now, scientists at Creative Proteomics have developed a reliable and reproducible method using highly sensitive LC-MS/MS platform for the rapid identification and quantification of plant secondary metabolites. We’re willing to provide service to satisfy the needs of academic and industrial study in your lab.