Glutathione is an important tripeptidethiol (γ-glutamylcysteinyl glycine) antioxidant composted of three amino acids, cysteine, glycine, and glutamate. As an important tripeptidethiol antioxidant widely distributed in biological fluids and tissues of plants, animals, fungi, and some bacteria and archaea, it is associated with many physiological functions, such as the transportation of amino acids, the synthesis of proteins and DNA, the stabilization of cell membranes and the detoxification of xenobiotics. 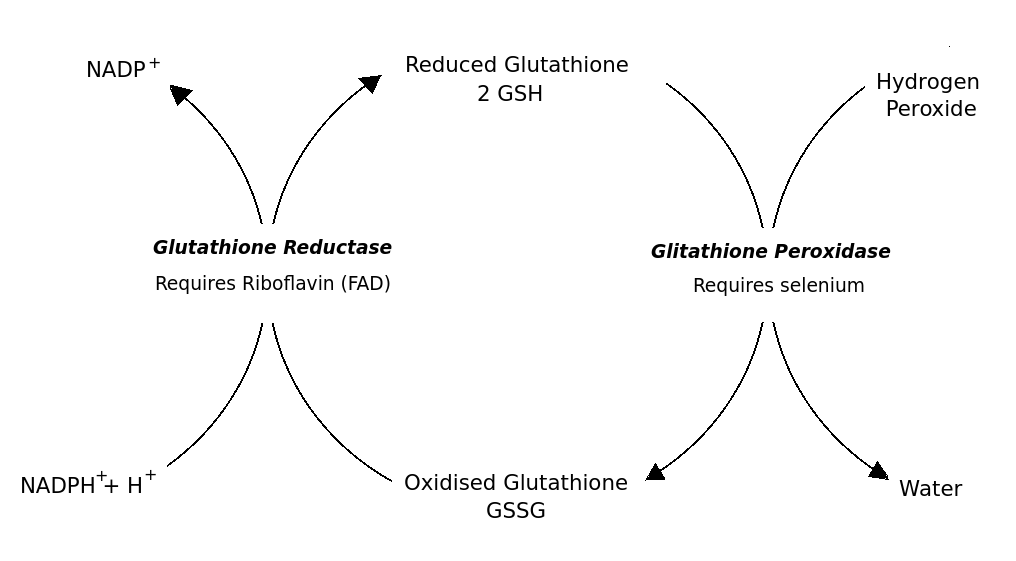 Glutathione plays an important role in fighting against toxic effects brought by reactive oxygen species like free radicals, lipid peroxides, peroxides and heavy metals. The reduced glutathione/oxidized glutathione ratio (GSH/GSSG) is widely used in clinics for the evaluation of oxidative stress status in biological systems. The changes of the ratio are shown existed in medical disorders such as inflammation, autoimmune disorders, sepsis, apoptosis, aging, cancer, HIV replication, and cardiovascular diseases.

The reduced form of glutathione GSH and oxidized form of glutathione GSSG work together with other redox-active compounds such as NADPH to maintain and regulate cellular redox status. GSH is quantitatively described as the redox potential, calculated by the Nernst equation. The synthesis of GSH is catalyzed by L-cysteine –ligase and glutathione synthase, while the oxidation, conjugation, and hydrolysis contribute to the consumption of GSH. Conjugation with endogenous and exogenous electrophiles is responsible for a large portion of cellular GSH consumption. The balance between its production, consumption, and transportation determine and strictly regulate the intracellular and extracellular GSH levels. The activities of the enzymes associated with GSH metabolism are regulated at transcriptional, translational, and posttranslational levels.

Besides acting as antioxidant, glutathione has several additional functions. For example, it is a reserve of cysteine and nitric oxide. It also takes part in the metabolism of estrogens, leukotrienes, and prostaglandins and the reduction of ribonucleotides to deoxyribonucleotides. What’s more, it is associated with the operation of certain transcription and the detoxification of many endogenous compounds. Because of its significant role in the organism, it is of great interest among pharmacologists to take GSH system as a possible target for medical interventions. Buthioninesulfoximine (BSO) has been used as the most popular approach to depleting GSH. Supplementation with precursors, such as cysteine in the form of different esters, has been used to enhance GSH levels.

Numerous technologies are available for the determination of GSH and GSSG, but only few of these are suitable for direct measurement of GSH and GSSG. HPLC-UV, capillary electrophoresis, HPLC-MS are among the methods described in the literature. These methodologies have different sensitivity, selectivity, specificity, and susceptibility to interferences. HPLC-MS is of the highest sensitivity, selectivity, and specificity. Creative Proteomics has established a robust, reproducible and highly sensitive HPLC-MS platform for the simultaneous quantification of GSH and GSSG.