A branched-chain amino acid (BCAA) is an amino acid having aliphatic side-chains with a branch (a central carbon atom bound to three or more carbon atoms). Among the proteinogenic amino acids, there are three BCAAs: leucine, isoleucine and valine. Non-proteinogenic BCAAs include 2-aminoisobutyric acid. The three proteinogenic BCAAs are among the nine essential amino acids for humans, accounting for 35% of the essential amino acids in muscle proteins and 40% of the preformed amino acids required by mammals. Synthesis for BCAAs occurs in all locations of plants, within the plastids of the cell, as determined by presence of mRNAs, which encode for enzymes in the metabolic pathway. 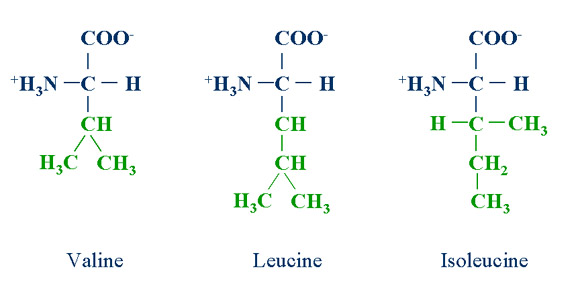 The first step in the catabolism of BCAA is a reversible transamination to a α-ketoacid. This step is catalysed by BCAT. There are two isoforms of this enzyme, one that is present in the mitochondria (BCATm) and is widely distributed throughout the body, and the other that is in the cytoplasm (BCATc) and restricted in distribution and present in high concentrations in the brain. Branched-chain keto acid dehydrogenase (BCDH) catalyses the second, and irreversible, step in the degradation of BCAA. This step results in the α-ketoacid undergoing oxidative decarboxylation and eventually, after a series of further reactions, results in the formation of a derivative of coenzyme A (CoA; e.g. acetyl-CoA forms from leucine).

Oxidation of BCAA in isolated tissues can be limited by either transaminase or dehydrogenase activity. Because the relative activities of these two enzymes vary from tissue to tissue, the metabolism of BCAA oxidation also varies. Shinnick and Harper measured BCAT activity, BCDH activity and leucine oxidation in several rat tissues. The BCAT activity was highest in heart, while BCDH activity was highest in liver. There is also high BCAT activity in the gut mucosa. Their results suggested that as the load of BCAA increases the liver may become an increasingly important site for the oxidative degradation of branched-chain keto acids.

Catabolism of BCAA is regulated principally at the step catalysed by the BCDH complex. This is possible because the enzyme exists in both an active (dephosphorylated) form and an inactive (phosphorylated) form. The kinase responsible for the phosphorylation and inactivation of this enzyme is branched-chain keto acid dehydrogenase kinase (BCDH kinase). This enzyme is located exclusively in mitochondria, and has most likely evolved from genes originally present in respiration-dependent bacteria endocytosed by primitive eukaryotic cells. The BCDH kinase cDNA encodes the complete mature protein of 412 amino acids, along with a mitochondrial entry sequence of 30 amino acids.

The BCAA exert an important effect on protein homeostasis in skeletal muscle. In 1975, Buse and Reid observed that the concentration of leucine in muscle cells played a key role in regulating the turnover of muscle proteins. High concentrations of leucine were associated with suppression of muscle proteolysis. Subsequent studies on the effect of BCAA ingestion or infusion on muscle proteolysis have supported these observations. In vitro studies have demonstrated that in skeletal-muscle beds, infused BCAA serve as an oxidative fuel source. In addition, they stimulate the synthesis of glutamine and alanine, which are then exported both to the liver to form glucose and to the gut as an energy substrate.