Amino sugars are chemical compounds that have a sugar backbone, in which one of the hydroxyl groups is replaced by an amine group. Derivatives of amine-containing sugars, such as N-acetylglucosamine, are also considered amino sugars. Incorporated into protein-linked sugar chains, amino sugars regulate protein function and, combined with other compounds, form antibiotics. 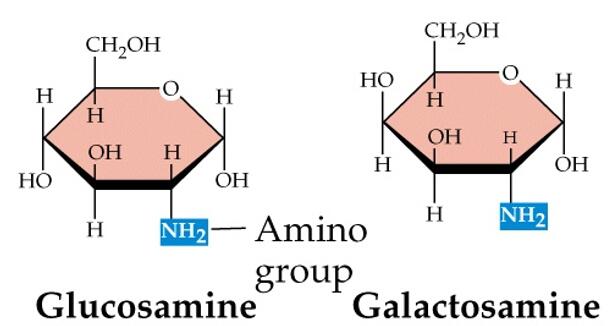 Figure. Amino sugars. The monosaccharides glucosamine and galactosamine are amino sugars with the amino group in place of a hydroxyl group.

Amino sugars are widely associated with structural polysaccharides or glycolipids, and they have been proposed as biomarkers for organic matter sources and their digenetic state. Three vital amino sugars are of physiological importance, namely glucosamine, galactosamine and neuraminic acid. Glucosamine and galactosamine are derived from glucose and galactose respectively, the amino group in each case replacing the hydroxyl group on C-2. Neuraminic acid is more complex. It is a nine-carbon amino sugar formed by the condensation of mannosamine 6-phosphate and phosphoenolpyruvate (PEP). It is the parent substance of the sialic acids that are acyl derivatives of neuraminic acid, e.g. N-acetylneuraminic acid. Sialic acids are found as constituents of glycoproteins and glycolipids and are believed to have an important bearing on the formation of the acquired integuments of the teeth. 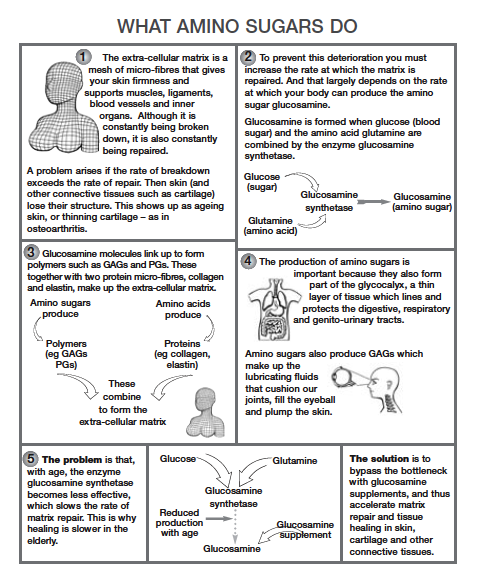