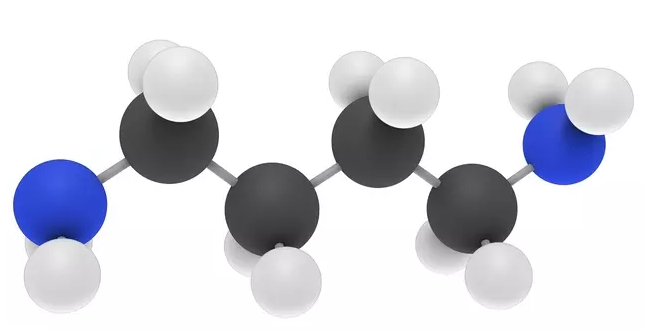 Putrescine, is also known as tetramethylenediamine, was first  described in 1885 by the Berlin physician Ludwig Brieger. Putrescine is a foul-smelling organic chemical compound with the chemical formula is NH2(CH2)4NH2  (1,4-diaminobutane or butanediamine) which is related to cadaverine. They are  produced by the breakdown of amino acids in living and dead organisms and both  are toxic in high doses. In rats it has a low acute oral toxicity of 2000 mg/kg  body weight, with no-observed-adverse-effect level of 180 mg/kg body weight.  The two compounds are mainly responsible for the foul odor of putrefying flesh,  but also contribute to the odor of the processes such as bad breath and  bacterial vaginosis. They are also found in semen and some microalgae, which  are accompanied by the related molecules like spermine and spermidine.

Method
Biogenic amines of Putrescine in a lot of biological  samples were detected by High-Performance Liquid Chromatography (HPLC), using precolumn derivatization  with DNS-Cl. This Methodology provides accurate, reliable, and reproducible  results of Putrescine measurement,  which enables us to analyze of Putrescine levels in vitro and in vivo.