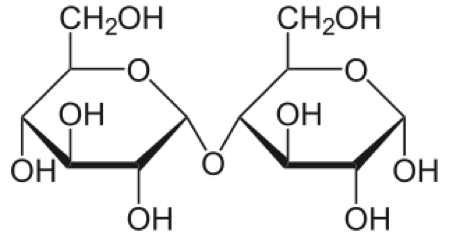 Maltose is also named as maltobiose or malt sugar and is a disaccharide formed from a condensation reaction, in which the two units of glucose joined with an α (1→4) bond. Maltose is discovered by Cornelius O'Sullivan, who is an Irish chemist in 1872 for the first time. The name of Maltose is from malt, which comes from Old English mealt. The suffix '–ose' means a suffix denoting names of sugars and other carbohydrates.

Maltose is the second important biochemical substrate in the series of glucose chains and it can be found in beverages, beer, cereal, pasta, potatoes. The production of Maltose is based on the hydrolysis of amylase into starch and is catalyzed by enzymes called amylases, which is classified into α-amylases and β-amylases, in which the digestion of starch is catalyzed by an α-amylase. Maltose is also produced when glucose is caramelized, which is a type of non-enzymatic browning of sugar. In humans, Maltose can be catalyzed by the enzyme named maltase, and then is broken into two glucose molecules in the biochemical process of the glucose metabolism accompany with the releasing of the energy.

Method
High-Performance Liquid Chromatography (HPLC) using a differential refractive index detector (RID) for the determination of Maltose levels in a lot of biological samples. This Methodology provides accurate, reliable, and reproducible results of Maltose measurement, which enables us to analyze of Maltose levels in vitro and in vivo.