Quinolones are synthetic bactericidal antibiotics that are broad-spectrum. Quinolones are one of the most commonly prescribed classes of antibacterials in the world and are used to treat a variety of bacterial infections in humans. Because of the wide use (and overuse) of these drugs, the number of quinolone-resistant bacterial strains has been growing steadily since the 1990s. Unlike some of the first antibiotics discovered during the past century, the quinolone class of antimicrobial agents was not isolated from living organisms but, rather, was synthesized by chemists. The original quinolone antibiotics included nalidixic acid, cinoxacin and oxolinic acid. The addition of fluoride to the original quinolone antibiotic compounds yielded a new class of drugs, the fluoroquinolones, which have a broader antimicrobial spectrum and improved pharmacokinetic properties. 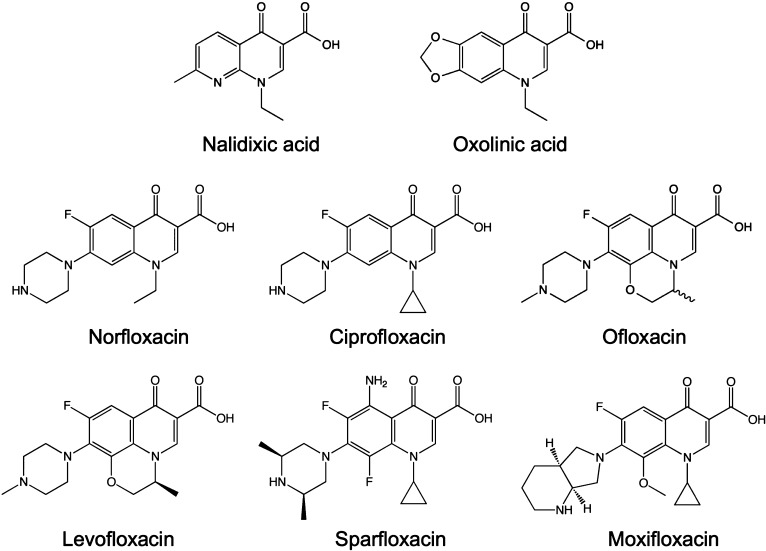 Quinolones rapidly inhibit DNA synthesis by promoting cleavage of bacterial DNA in the DNA-enzyme complexes of DNA gyrase and type IV topoisomerase, resulting in rapid bacterial death. As a general rule, gram-negative bacterial activity correlates with inhibition of DNA gyrase, and gram-positive bacterial activity corresponds with inhibition of DNA type IV topoisomerase. In order to carry out their critical physiological functions, gyrase and topoisomerase IV generate double-stranded breaks in the bacterial chromosome. Thus, while essential for cell survival, these enzymes have the potential to fragment the genome. Quinolones take advantage of this latter, and potentially lethal, characteristic and kill cells by increasing the concentration of enzyme–DNA cleavage complexes. Thus, these drugs are termed “topoisomerase poisons” because they convert gyrase and topoisomerase IV into cellular toxins. In contrast, “catalytic inhibitors” block the overall catalytic functions of these enzymes without increasing levels of DNA strand breaks. Quinolones bind in a noncovalent manner at the enzyme–DNA interface in the cleavage–ligation active site. Drugs interact with the protein and intercalate into the DNA at both cleaved scissile bonds. Because the scissile bonds on each strand are staggered, two drug molecules are required to increase levels of double-stranded DNA breaks. As a result of their intercalation, quinolones increase the steady-state concentration of cleavage complexes by acting as physical blocks to ligation.

In early studies, the quinolones were observed to have excellent oral absorption, good distribution in tissue, with excellent interstitial fluid levels, entry into phagocytic cells, and urinary concentrations that exceeded the MICs for many common pathogens. Key structural modifications resulted in improved pharmacokinetics (e.g., a longer elimination half-life, which permitted once-daily dosing and better tissue penetration) of some of the newest quinolones, including gatifloxacin, gemifloxacin, grepafloxacin, moxifloxacin, sitafloxacin, sparfloxacin, and trovafloxacin. Specific modifications included alkylation of the quinolones, which improved elimination half-life and penetration into tissue; the addition of 2 methyl groups to the C-7 piperazine ring, which increased oral efficacy; the addition of an amino group at C-5, which increased lipophilicity; and the addition of a halogen at position C-8, which improved in vivo activity.

If the use of quinolones in clinical medicine is to continue, the emergence of bacterial resistance to the quinolones should remain of primary importance as an area of current and future research. Liquid chromatography (LC) is the analytical method most widely applied for the determination of these compounds, and both UV and fluorescence detections are usually employed. The high fluorescence quantum yield exhibited by several quinolones allows for highly sensitivity analytical methods. Creative Proteomics has established sensitive, reliable, and accurate LC-MS/MS method for quinolones quantification.