Pyrimidine nucleotides play a critical role in cellular metabolism serving as activated precursors of RNA and DNA, CDP diacylglycerol phosphoglyceride for the assembly of cell membranes and UDP-sugars for protein glycosylation and glycogen synthesis. In addition, uridine nucleotides act via extracellular receptors to regulate a variety of physiological processes. There are two routes to the synthesis of pyrimidines; nucleotides can be recycled by the salvage pathways or synthesized de novo from small metabolites. Most cells have several specialized passive and active transporters that allow the reutilization of preformed pyrimidine nucleosides and bases.

The relative contribution of the de novo and salvage pathways depends on cell type and developmental stage. In general, the activity of the de novo pathway is low in resting or fully differentiated cells where the need for pyrimidines is largely satisfied by the salvage pathways. In contrast, de novo pyrimidine biosynthesis is indispensable in proliferating cells in order to meet the increased demand for nucleic acid precursors and other cellular components. Consequently, the activity of the de novo pathway is subject to elaborate growth state-dependent control mechanisms. Pyrimidine biosynthesis is invariably up-regulated in tumors and neoplastic cells, and the pathway has been linked to the etiology or treatment of several other disorders including AIDS, diabetes, and various autoimmune diseases such as rheumatoid arthritis. 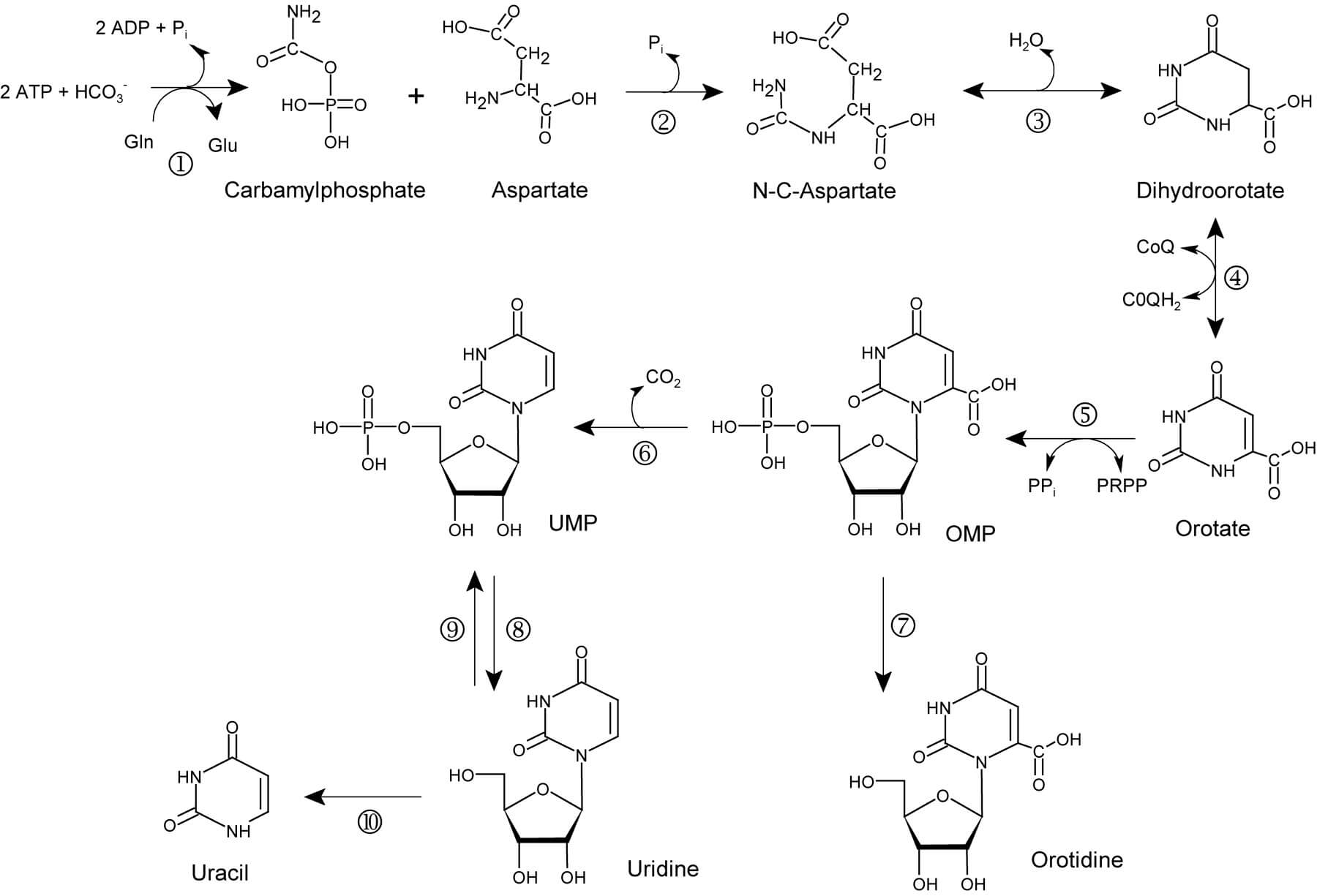 Biochemical and microscopic studies showed that CAD is primarily cytosolic with a smaller fraction in the nucleus. In the cytosolic compartment, CAD and UMP synthase are localized around and outside the mitochondria, and CAD appears to be associated with the cytoskeleton. Mitochondria are known to be anchored to the cytoskeletal network, so an interesting possibility is that CAD binds to and translocates along the filament to the mitochondria where DHOdhase is located. The physical association of CAD with the mitochondria is an attractive idea because under physiological conditions, the equilibrium strongly favors the formation of carbamoyl aspartate over dihydroorotate. Docking CAD near the mitochondria may allow a more efficient capture of dihydroorotate by DHOdhase and prevent the accumulation of carbamoyl aspartate in the cell.

The intracellular nucleotide pools are controlled within narrow limits in normal, resting cells but expand 3- to 4-fold in tumor cells. Even larger, 8-fold, increases occur in mitogenstimulated lymphocytes. The increased demand for nucleotides is satisfied in large part by up-regulation of de novo pyrimidine biosynthesis as a result of increased intracellular enzyme levels and metabolic control mechanisms. The rate of cell growth probably sets the level of CAD and other enzymes and establishes the basal rate of de novo pyrimidine biosynthesis, but the rapid changes in flux through the pathway requires precise metabolic control exerted by allosteric effectors and the activity of signaling cascades.

Currently, a reliable and reproducible method using highly sensitive HPLC-MS platform for the rapid identification and quantification of pyrimidine biosynthesis metabolites in different sample types has been established by the experienced scientists at Creative Proteomics, which can satisfy the needs of academic and industrial study in your lab.