Pterin is a heterocyclic compound composed of a pteridine ring system, with a keto group and an amino group on positions 4 and 2 respectively. Pterins, as a group, are compounds that are derivatives of the basic pterin structure, described in the beginning, with additional functional groups attached to the pyrazine subring. Pterins were first discovered in the pigments of butterfly wings and perform many roles in coloration in the biological world.

Pterins have a wide range of metabolic roles, including as essential intermediates in folate biosynthesis, as products of folate breakdown, and as cofactors for aromatic hydroxylases. The oxidation state of the pterin ring is crucial to biochemical function because only reduced (dihydro or tetrahydro) forms are metabolically active. The intermediates of folate synthesis are dihydro forms, as is the major pterin formed by folate breakdown. Pterin cofactors are tetrahydro forms. Reduced pterins readily autoxidize to their fully oxidized (aromatic) state. A capacity to reduce oxidized pterins to their bioactive forms would thus seem a likely auxiliary to folate and pterin pathways. So far, however, only Leishmania and other trypanosomatid parasites are definitively known to have this capacity. These organisms, which are pterin and folate auxotrophs, contain an NADPH dependent pterin reductase that mediates the two-stage reduction of pterins to their 7,8-dihydro and tetrahydro states. 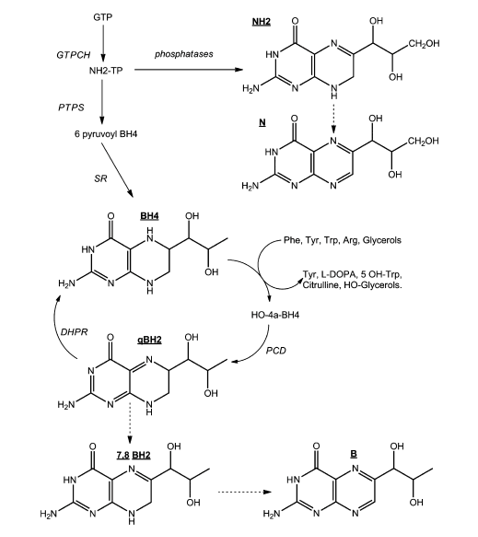 In mammals, tetrahydrobiopterin (BH4) is an essential cofactor for aromatic amino acid hydroxylases, glyceryl-ether mono-oxygenase, and three nitric oxide synthases. Thus, BH4 plays an important role in monoamine neurotransmitters metabolism. In humans, defects in the metabolism or recycling of BH4 leading to BH4 deficiency are associated with neurological deterioration including progressive mental and physical retardation, central hypotonia and peripheral spasticity, seizures, and microencephaly. Lack of BH4 synthesis or regeneration can be due to one of five known inborn errors of metabolism leading to the deficiency of five enzymes. The diagnosis of these conditions relies on the accurate determination of neurotransmitters and pterins, notably BH4, dihydrobiopterin (BH2), and dihydroneopterin (NH2) in the cerebrospinal fluid.

Direct quantification of BH4, BH2, and NH2 is essential for studying BH4 and neurotransmitter metabolism. This area of research is very active as reflected in a recent description of an unknown genetic disorder of neurotransmitter translocation into synaptic vesicles. Besides, as BH4 is used as a therapeutic agent in patients with BH4 deficiency, a direct and accurate method of BH4 quantification in biological fluids and tissues is needed for pharmacokinetic studies and for determining the efficacy of the treatment. Some methods of direct quantification through FD after chemical or photochemical postcolumn oxidation have been implemented. LC-MS/MS (liquid chromatography coupled to tandem mass spectrometry) was used to determine B concentrations in plasma by applying an oxidation conversion ratio. However, the sensitivities of these methods were not satisfactory as compared to those of ICO methods. As oxidized pterins are fluorescent while their reduced counterparts are not, the most widely used method for pterin determination in CSF requires carrying out two HPLC (high performance liquid chromatography) runs coupled to fluorescence detection (FD) including two off-line iodine oxidation procedures for complete analysis. The first run involves oxidation under acidic conditions of both BH4 and BH2 into biopterin (B), and NH2 into neopterin (N) prior to injection into the chromatograph. The second run involves the oxidation under alkaline conditions of BH2 into B and BH4 into pterin (P). Although time-consuming, this indirect chemical oxidation (ICO) method has been widely used notably because it has appropriate sensitivity.

Creative Proteomics provides fast and effective method for quantification of pterins based on customer needs.