Flavin is the common name for a group of organic compounds based on pteridine, formed by the tricyclic heterocycle isoalloxazine. The riboflavin (RF), vitamin B2, is an essential precursor of flavin adenine dinucleotide (FAD) and flavin mononucleotide (FMN) co-enzymes. Another compound of the flavin family is lumiflavin. The flavins have in common the isoalloxazine ring system where the redox process occurs. The nature of the group attached to the N-10, is the flavin members differentiation and can influence the flavin adsorption orientation on the electrode surface, leaving the active site more or less available. The redox process of the flavins is thermodynamically reversible, irrespective of whether one or two electrons per flavin molecule are being transferred, which means that their redox states (quinone state, semiquinone state, hydroquinone state) must be considered. 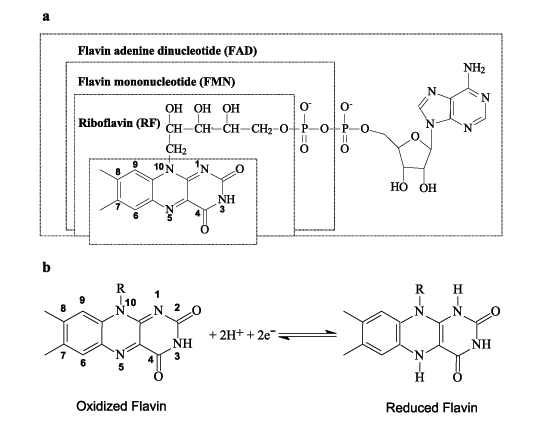 Figure 1. Chemical structure and nomenclature of the flavins in oxidized state (a) and redox process of part of flavin structure (b).

Flavins are useful in physiologic systems in that they are stronger oxidizing agents than NAD+, thus fitting in further along the electron transport chain. They participate in one or two electron processes (and thus reactions with free radicals or metal ions), and in reduced form react directly with O (as in hydroxylation reactions). Riboflavin is thus an enzyme cofactor, or coenzyme, fundamental to many areas of metabolism, and is intimately involved in processes by which the oxidation of glucose and fatty acids are utilized for adenosine triphosphate (ATP) formation, and thus the support of metabolic processes. Riboflavin coenzyme formation (and thus trapping within cells), is initiated through phosphorylation by a flavokinase, which is positively regulated by the most active form of thyroid hormone.

Flavins that are bound to proteins are resistant to degradation. However, unbound forms are subject to catabolism. Both FAD and FMN are catabolized by intracellular enzymes in ways directly analogous to the breakdown of these forms in foods during their absorption across the intestinal mucosal cell. Thus, FAD is converted to FMN by FAD-pyrophosphatase (releasing AMP), and FMN is degraded to free riboflavin by FMN-phosphatases. Both FAD and FMN are split to yield free riboflavin by alkaline phosphatase.

The degradation of riboflavin per se involves initially its hydroxylation at the 7α- and 8α-positions of the isoalloxazine ring by hepatic microsomal cytochrome P-450-dependent processes. It is thought that catabolism proceeds by the oxidation and then removal of the methyl groups. The liver, in at least some species, has the ability to form riboflavin α-glycosides. As a result of this metabolism, human blood plasma contains FAD and FMN as the major riboflavin metabolites, as well as small amounts of 7α-hydroxyriboflavin. Side chain oxidation has been observed in bacterial systems, but not in higher animals. 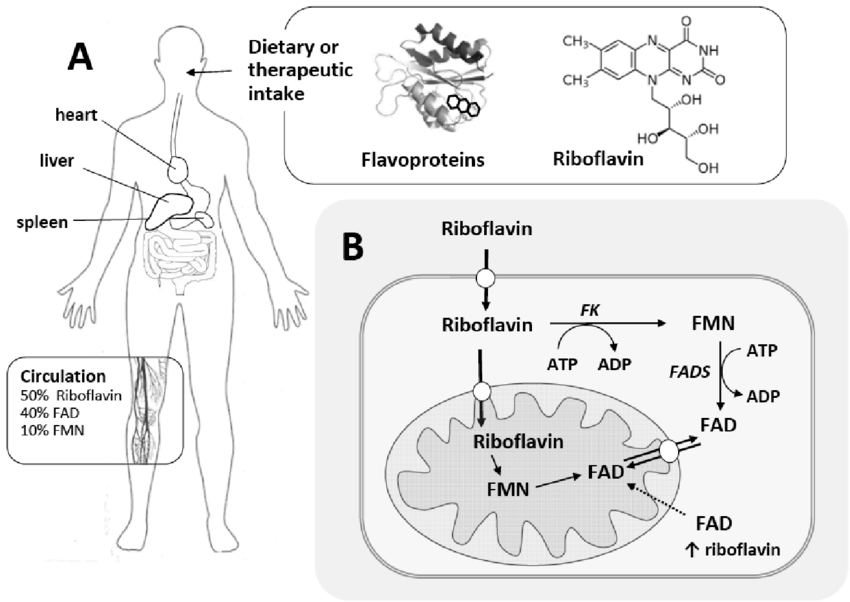 The chemistry of flavins has been studied extensively. Riboflavin is a stable compound with a variety of interesting properties. FMN and FAD are much more important in cells, but are less stable in solution because of the presence of phosphate ester and anhydride bonds. Riboflavin is responsible for the important biological chemistry of all flavins. One reason that flavoproteins have been so extensively analyzed is that they can be studied by examining the properties of their cofactor that is nearly always involved in the core function of each protein. Another reason is the variety of chemical properties that have been exploited for important biological functions of considerable diversity.

Flavins work as co-factors and form an integral part of the redox active sites of many different enzymes involved in dehydrogenation reactions, dioxygen activation, and electron transfer reactions. The understanding of the versatile chemistry of flavins and the mechanisms of action of flavoprotein enzymes is of extreme importance and has been focus of many investigations. Creative Proteomics provides reliable, rapid and cost-effective flavins targeted flavins metabolomics services.