Biliverdin is a green pigment formed as a byproduct of hemoglobin breakdown. It consists of four linearly connected pyrrole rings (a tetrapyrrole). Biliverdin is formed when the heme group in hemoglobin is cleaved at its alpha-methene bridge. The resulting biliverdin is then reduced to bilirubin, a yellow pigment, by the enzyme biliverdin reductase. The changing color of a bruise from deep purple to yellow over time is a graphical indicator of this reaction. Biosynthesized from hemoglobin is a precursor of bilirubin. This occurs in the bile of amphibia and of birds, but not in normal human bile or serum.

Heme is best known as a constituent of hemoglobin, which is released in association with the breakdown of aging red blood cells. Heme also is contained in a wide range of enzymes whose turnover also leads to free heme release. Free heme can be toxic, so nature evolved a family of heme oxygenase enzymes to degrade heme, and their blockade leads to greatly increased excretion of unmetabolized heme in the bile. These enzymes cleave the heme ring to form biliverdin, iron, and a 1-carbon fragment as carbon monoxide. CO is increasingly appreciated as a neurotransmitter, and iron, itself toxic, is excreted from cells by a recently characterized pump. Biliverdin would seem to be an appropriate end product of the pathway, being readily excreted in the bile to enter the intestine and leave the body in the feces. Indeed, in birds, reptiles, and amphibians, biliverdin is the predominant end product of heme degradation. For reasons that until now have seemed obscure, in mammals, biliverdin undergoes additional metabolism, being reduced by biliverdin reductase (BVR) to bilirubin, a step that consumes the energy resource nicotinamide adenine dinucleotide phosphate (NADPH). 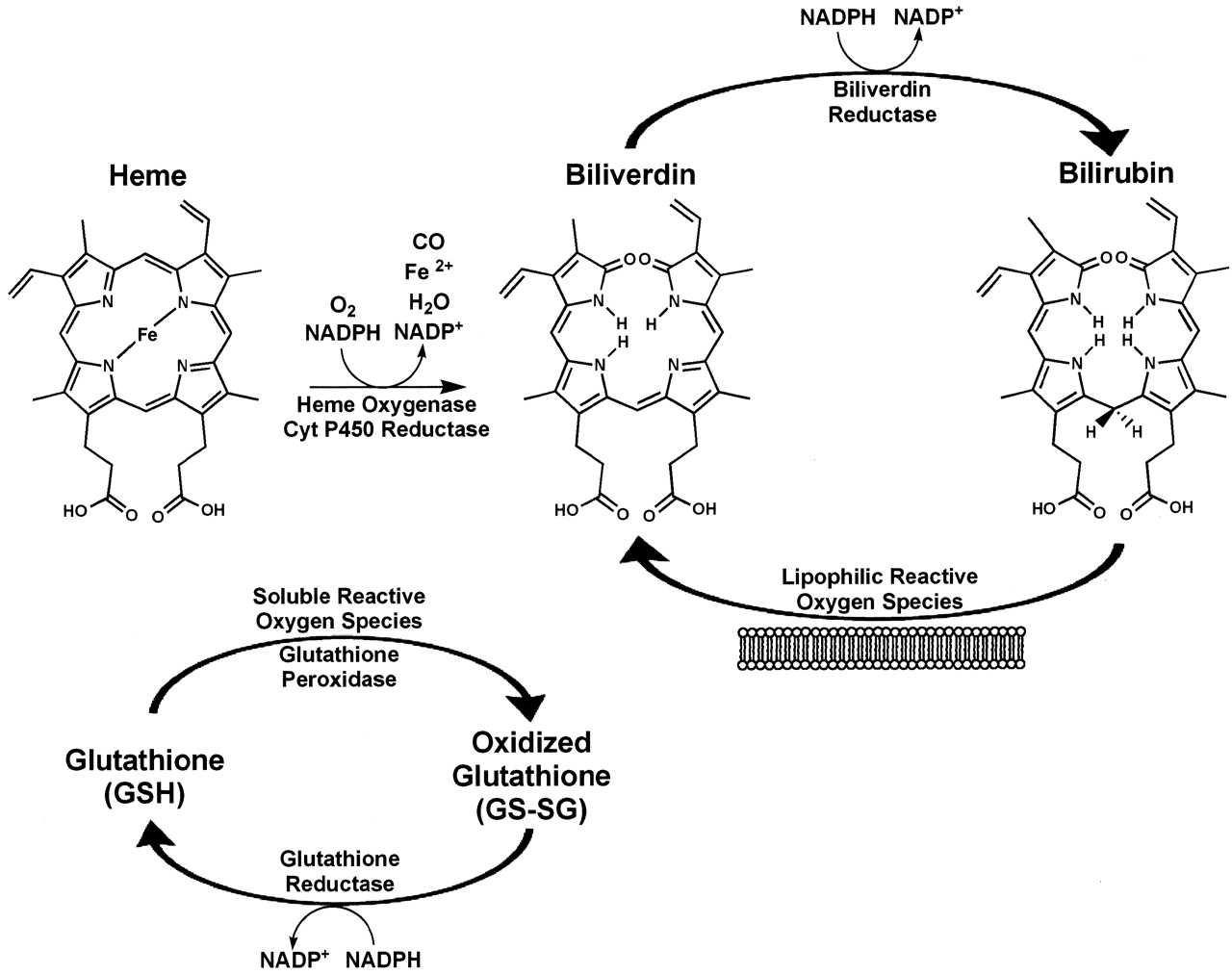 Biliverdins are derived formally from hemes by oxidative removal of a methine bridge and loss of the iron atom. The asymmetric nature of heme IX results in the possibility of four different biliverdin isomers, each corresponding to the removal of a different methine bridge and named accordingly. Thus the Ixα, IXβ, IXγ and IXδ isomers illustrated in scheme I correspond respectively with removal of α, β, γ and δ bridges of mesoheme. Such isomerism is of importance in studying heme and bilin metabolism. 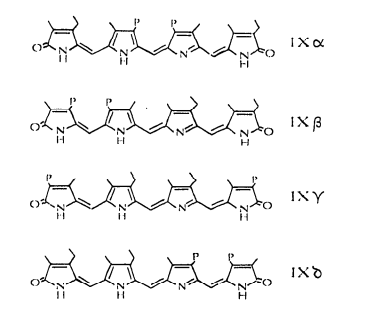 Biliverdin possess significant anti-mutagenic and antioxidant properties and therefore may fulfil a useful physiological function. Biliverdin and bilirubin have been shown to be potent scavengers of peroxyl radicals. They have also been shown to inhibit the effects of polycyclic aromatic hydrocarbons, heterocyclic amines, and oxidants — all of which are mutagens. Some studies have found that people with higher concentration levels of bilirubin and biliverdin in their bodies have a lower frequency of cancer and cardiovascular disease. It has been suggested that biliverdin — as well as many other tetrapyrrolic pigments — may function as an HIV-1 protease inhibitor as well as having beneficial effects in asthma though further research is needed to confirm these results. There are currently no practical implications for using biliverdin in the treatment of any disease.

In mammals, the transformation of biliverdin by biliverdin reductase is rapid. Biliverdin is thus a short-lived species and, compared to bilirubin, is present in serum in relatively low concentrations. Increased serum concentrations of biliverdin (hyperbiliverdinaemia or green jaundice) in human beings are rare, and are mostly caused by mutations in genes for metabolic enzymes. Biliverdin has not been included in standard diagnostic testing; however, several studies have suggested the administration of biliverdin in therapy due to its antioxidant and anti-inflammatory activity. Such administration could increase the demand for a biliverdin assay in the future. On the other hand, a need for a biliverdin diagnostic assay already exists in veterinary medicine. Birds and reptiles have little biliverdin reductase activity, and produce very low amounts of bilirubin. Increased concentrations of biliverdin in serum, bile, or excreta can point to anemia due to intoxication or infection or to liver problems or biliary obstruction. Biliverdinuria is almost always the sign of hepatic disease and occurs due to a serum accumulation of biliverdin that exceeds the renal threshold. Biliverdin is therefore an alternative analyte in bird and reptile disease diagnostics for which the reference values remain to be established. Additionally, biliverdin is also an important pigment of eggshells in several species. Egg coloration studies also require a biliverdin assay to determine biliverdin content in the eggshells.

A clear need for an efficient, simple, and cost-effective method for biliverdin determination thus exists. Creative Proteomics provides a one-dimensional thin-layer chromatographic system that used for the resolution of the IXα, IXβ, IXγ, and IXδ isomers of biliverdin, and each isomer is unambiguously identified.