Matrix-assisted laser desorption/ionization (MALDI) is a technique for soft ionization of mass spectrometry that uses a laser energy absorbing matrix to create ions from large molecules with minimal fragmentation. It has been widely used to measure the molecular weight of biomacromolecules such as peptides, proteins, nucleic acids, molecular weight distribution of polymers, and oligomer analysis. MALDI mass spectrometry is characterized by high sensitivity, wide application range, and simple operation. It has extended the traditional mass spectrometry technology mainly for small molecule research to analyze the range of highly polar, hardly volatile, and thermally unstable samples.

The MALDI method is divided into three steps. First, the sample is mixed with the appropriate substrate material and applied to the metal plate. Secondly, the pulse laser irradiates the samples, triggering the ablation and desorption of samples and matrix materials. Finally, the analyte molecules are ionized by protonation or deprotonation in the hot plume of the ablation gas, and then accelerated to the mass analyzer to analyze them.

The Principle of MALDI

For heat-sensitive compounds, if they are heated very quickly, they can be prevented from being thermally decomposed. The MALDI technique is similar to this principle: in a tiny region, in a very short time interval (on the order of ns), the laser provides high-intensity pulsed energy to the analyte on the target, allowing it to desorb and ionize in an instant without producing thermal decomposition. MALDI is a mass spectrometry ionization method for directly vaporizing and ionizing non-volatile samples, but its ionization mechanism is still unclear. There are two possibilities that ions are formed in the solid state, and the laser irradiation is only a simple release or produced by a laser-induced ion-molecule reaction. 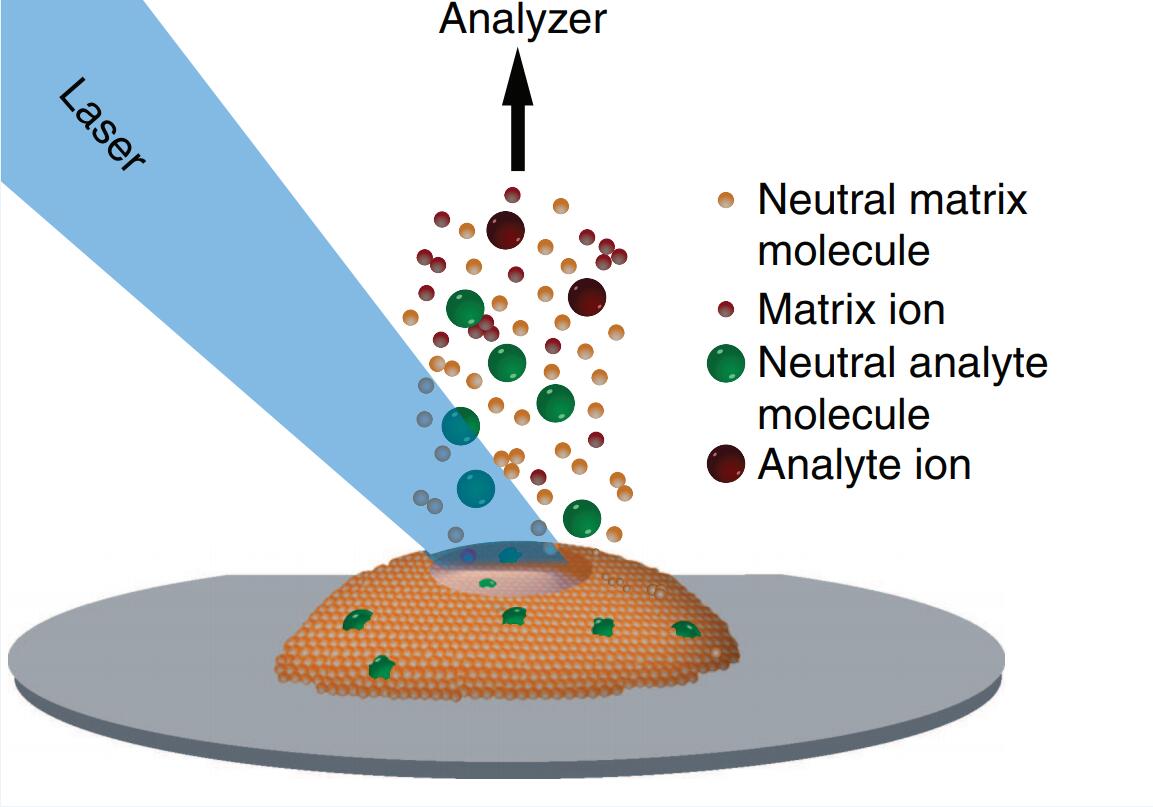 The choice of matrix is one of the most important steps in MALDI analysis. The ideal matrix generally has the following properties: strong electron absorption at the laser wavelength used; better vacuum stability, lower vapor pressure, and good miscibility with the analyte in the solid state. In MALDI technology, the matrix has a special effect on the analysis of the sample: dilute the sample to dissociate the clustered macromolecule; protect the sample, the matrix absorbs the laser energy and then transfers it to the sample to avoid direct laser irradiation of the sample and lead to decomposition of the sample molecules. The choice of matrix depends primarily on the wavelength of the laser used, followed by the nature of the object being analyzed. Commonly used substrates are niacin, 2,5-dihydroxybenzoic acid and mesonic acid.

Most MALDIs use solid (crystalline) organic matrices, but these matrices produce corresponding background peaks in low mass regions, which interfere with the characterization of small molecule compounds. Recently, a series of new matrix materials have been reported which can reduce or remove matrix interference, such as high molecular weight porphyrins, surfactant inhibiting substrates, inorganic materials, carbon nanotubes and porous silicon. In addition, the addition of matrix additives to the matrix solution can improve the analytical results and greatly improve the sensitivity, reproducibility, resolution and signal suppression of desorption.

Compared with other mass spectrometry ionization techniques such as electron bombardment ionization and chemical ionization, MALDI technology has the following characteristics:

MALDI is a soft ionization technique that can create ions from large molecules with minimal fragmentation. It has been applied to the analysis of biomolecules, large organic molecules, etc.