In APPI, the solvent and sample from the liquid chromatography first form a gaseous analyte (M), which is ionized to interact with photons emitted by the light source, and the ions are introduced into the mass spectrometer for analysis. During this process, both the analyte and the solvent may be excited, and the analyte may also acquire protons from the protic solvent:

Wherein M represents an analyte and S represents a solvent. Since both the solvent and the analyte are likely to be ionized, the emission energy of the ultraviolet light source should be greater than the ionization potential of the analyte and less than the ionization potential of the air component and the solvent, which can reduce the amount of impurity ions entering the mass spectrometer. The APPI light source can be derived from an argon lamp, a xenon lamp, a xenon lamp, or the like. Among them, xenon lamps are used most frequently, and the red light energy emitted by xenon lamps is between common solvents and most compounds.

The method in which the analyte in the formula (1) is directly ionized is called direct APPI. In addition, the amount of ions generated by direct photoionization of some analytes is small, so it is necessary to add one or several suitable substances to help the analyte to form ions in a large amount. The medium that can help the analyte to ionize is called a dopant. The typical dopant involved in the APPI process is as follows (D represents the dopant):

The APPI process in which the dopant is involved is referred to as dopant-assisted APPI (DA-APPI). As a medium for photoionization, the dopant helps the analyte to form ions mainly by exchanging charge or proton transfer. Initially, the dopant is ionized after receiving photons. The ionized dopant ions (D+) can exchange charge directly with the analyte to form M+. On the other hand, the D+ can also transfer the obtained positive charge to the solvent, and then the protons are transferred to the analyte by the solvent, thereby forming enough [M + H]+ to enter the mass spectrometer. It can be known from the DA-APPI process that the two basic conditions as a dopant are that the ionization potential is lower than the energy of the photon emitted by the light source and the proton affinity is low. 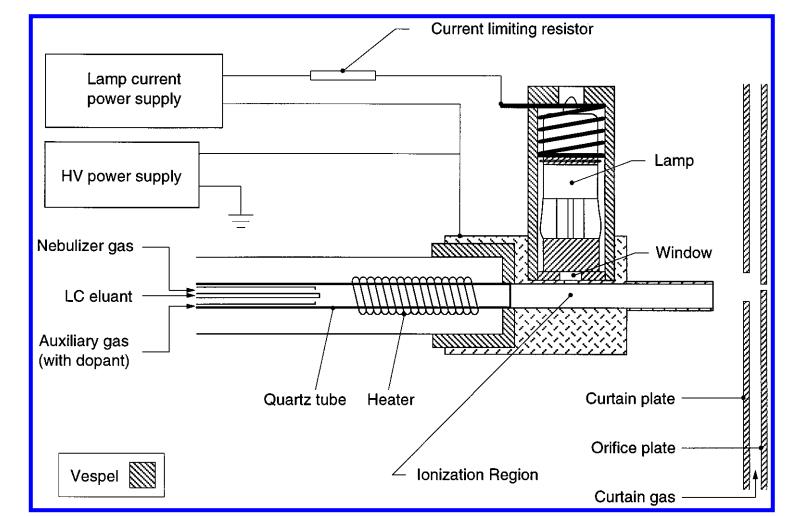 Advantages and Disadvantages of APPI

APPI has significant analytical advantages for compounds, particularly weakly polar and non-polar compounds. It can be used to analyze drugs, drug products, peptidoglycans, polycyclic aromatic hydrocarbons, steroids, mycotoxins, quinine, acetaldehyde, ketones, and so on. APPI can simultaneously ionize polar and non-polar small molecules, allowing users to analyze more compounds in a single pass. At the same time, APPI greatly reduces the matrix effect and relative ion inhibition during the measurement process, which simplifies the sample purification process, saves the sample pretreatment time, obtains better analyte recovery rate, and ensures the quality of analysis data. Moreover, the measurement results of APPI have a dynamic linear range of 5 orders of magnitude, which is the preferred ion source method for quantitative analysts.

However, APPI is less sensitive than atmospheric pressure chemical ionization. Moreover, APPI is not suitable for compounds with poor thermal stability. In the actual analysis, the amount of ions generated by direct photoionization of some analytes is small, so the dopant is indispensable for APPI.

APPI promotes the development of LC/MS in practical applications. LC-APPI-MS reduces detection costs and detection time without sacrificing sensitivity and specificity, making it widely used in analytical assays in the food, environmental, medical, and chemical industries.

Due to the interference of human activities, more and more toxic and harmful substances are discharged into the environment, causing pollution of water, atmosphere, soil and organisms. LC-APPI-MS plays an important role in the analysis of trace amounts of medical drug residues, pesticides, fungicides, preservatives, food additives, and industrial chemicals. The LC-APPI-MS with toluene as a dopant detects the drug residues in the water, and the detection limits of drug residues such as dysentery, acetaminophen, caffeine, naproxen, paracetamol, and acetophenone are between 0.3 ng/L and 15 ng/L.

The harmful substances in human blood can be analyzed with APPI. The blood sample was treated with formic acid and acetonitrile, and the supernatant was separated for analysis. The intra-day recovery rates of paraquat and diquat were 99.0% and 91.9%, respectively, and the relative standard deviations were 5.8% and 6.5%, respectively. The use of APPI to detect harmful substances in human body has the advantages of low detection limit, short analysis time and simple pretreatment operation.

The effects of antibiotics on environmental microorganisms, animal and plant growth, and human health have drawn wide attention. With good sensitivity and selectivity, APPI is an ideal ionization technique for the determination of chloramphenicol residues in fish. In the detection of carp and flounder, the detection limits were 0.27 ng/g and 0.10 ng/g, respectively. In addition, 18 kinds of aminobenzene sulfonamides in honey were analyzed by APPI. The detection limit was 0.4~4.5μg/kg, and the sensitivity was 1.0~6.6 times and 2.4~8.2 times of ESI source and APCI source, respectively.

APPI, which has been widely used in many fields, has become another successful ion source after electron bombardment ionization and chemical ionization. The development and application of APPI in LC-MS has improved the analytical sensitivity of non-polar compounds, expanded the detection range of ionizable compounds, and expanded the analytical application field of mass spectrometers. At the same time, APPI is less interfered by phosphate buffer and surfactant, which provides a good prospect for capillary electrophoresis mass spectrometry.