The Principle of APCI

Figure 1. Schematic illustration of the APCI. 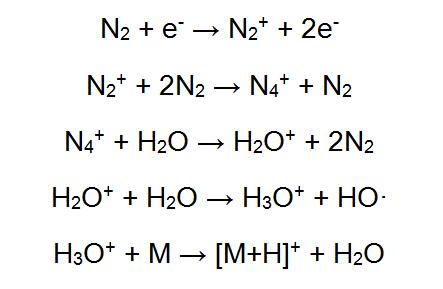 Advantages and Disadvantages of APCI

APCI produces a singly charged product, and the product molecular mass spectrum can be directly observed. That is, APCI does not suffer from the problem of multi-charged ion products leading to signal overlap and reduced resolution of the mass spectrum. APCI must vaporize the sample and is therefore suitable for the analysis of weakly polar compounds with good thermal stability and low proton affinity. In terms of mobile phase flow rate, APCI can accommodate higher flow rates than ESI.

In addition, APCI is not suitable for the analysis of biological macromolecules because it cannot generate a series of multi-charged ions. APCI produces very few fragment ions and therefore has limited structural information.

APCI combined with high performance liquid chromatography and mass spectrometry has important applications in the measurement of harmful substances in tobacco. HPCL-APCI-MS/MS exhibits excellent detection ability for carbonyl compounds and glycoside compounds in tobacco. By detecting solanesol in tobacco, the method has a detection limit of 0.4 μg/L. The content of heterocyclic amine in eight cigarette samples was determined by liquid chromatography tandem quadrupole mass spectrometry in APCI mode. The detection limit was 0.042~2.8 ng/branch, and the recovery rate was 68%~108%.

Ceramide is essential for maintaining the barrier function of the skin. Many skin diseases are known to be associated with ceramide profiles. Using a combination of APCI-mass spectrometry and normal phase chromatography to obtain a mass spectrum of nine ceramides known to exist helps us understand the underlying molecular mechanisms that ultimately lead to new diagnostic protocols. For example, the mass spectrum of patients with severe skin disease (such as atopic dermatitis and psoriasis) can be compared to the mass spectrum of the healthy controls.

APCI mass spectrometry combined with gas chromatography-mass spectrometry was used to study the presence of volatile compounds in cheeses of different maturity. This technique can correctly predict the age of cheese according to the characteristics of different mature stages of cheese, providing a 70% success rate. In addition to predicting maturity, the results of the analysis combined with chemometrics for rapid and detailed analysis of volatile components of cheese provide a basis for quality assessment and accelerated product development.

APCI forms a single-charged product that is much more sensitive than electrospray, thermal spray, and ion beam sources, making it easier and faster to analyze drugs and their metabolites. APCI can give results within 8 minutes for quantitative analysis of 8 phthalic acid derivatives in human urine. Meanwhile, APCI can also quickly and sensitively analyze flavonoids, sulfonamides and pentafluorobenzene derivatives.

LC-APCI/MS has the characteristics of simple operation, high sensitivity and clear signal. It has a wide range of applications in medicine, environment, chemistry and agriculture. With further development and optimization, APCI will be used in various applications.