Orthogonal partial least squares discriminant analysis (OPLS-DA) was introduced as an improvement of the PLS-DA approach to discriminate two or more groups (classes) using multivariate data. In OPLS-DA, a regression model is constructed between the multivariate data and a response variable that only contains class information. The obvious advantage of OPLS-DA compared with PLS-DA is that a single component serves as a predictor for the class, while the other components describe the variation orthogonal to the first predictive component. Wiklund et al. used the terms between treatment variation to depict the average effect of treatment and within treatment variation to describe the systematic remainder variation, which is not related to the treatment. The treatment effect is supposed to be equal for all subjects although the magnitude is allowed to be different for each subject. Treatment effects that differ from the average treatment effect are referred to as within treatment variation. Now, bioinformaticians at Creative Proteomics are proud to tell you we are open to help you with OPLS-DA Service! 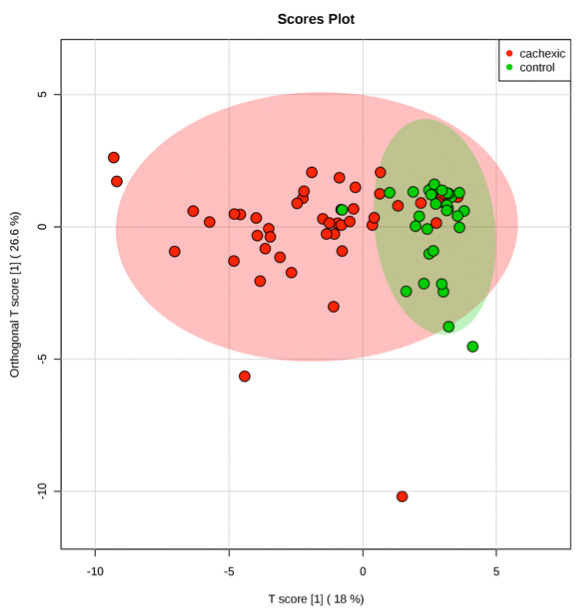 The predictive component with OPLS-DA method actually describes the direction of the difference for the treatment effect between the average of class A and the average of class B according the representation given in the above figure (dotted line). Then all samples are projected on this component to estimate the predictive scores. Although a group-average effect is observed in this example, the projection on the line clearly indicates that the classes are not well separated. Furthermore, in OPLS-DA only a single predictive component is calculated (in case of a two-class problem). When the treatment affects demonstrate differently among the subjects in the test population, this will not be observed by the OPLS-DA method.