Molecular dynamics (MD) simulation is a computer simulation technique for studying the physical movements of atoms and molecules, and is a type of N-body simulation. The method was originally developed within the field of theoretical physics in the late 1950s. In this method, the atoms and molecules are allowed to interact for a given period of time, giving a view of the dynamical evolution of this system. In the most common version, the trajectories of atoms and molecules depends on numerically solving Newton's equations of motion for a system of interacting particles, where forces between the particles and their potential energies are computed using interatomic potentials or molecular mechanics force fields. Apart from the modeling of biomolecules, it is also widely applied today mostly in chemical physics, materials science. Now, bioinformaticians at Creative Proteomics are proud to tell you we are open to help you with Molecular Dynamics Simulation Service! 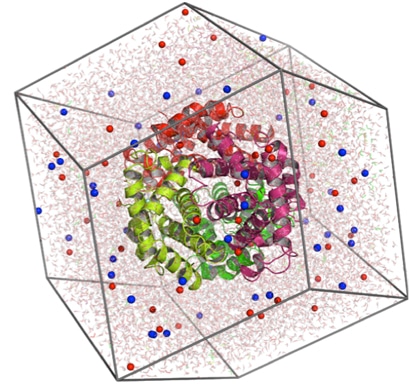 Because molecular systems generally consist of a vast number of particles, it is impossible to determine the properties of these complex systems analytically; MD simulation circumvents this problem by using numerical methods. However, long MD simulations are often mathematically ill-conditioned, generating cumulative errors in numerical integration that can be minimized with suitable selection of algorithms and parameters, but not eliminated entirely. For systems that obey the ergodic hypothesis, the evolution of a molecular dynamics simulation may be used to determine macroscopic thermodynamic properties of this system: the time averages of an ergodic system correspond with micro canonical ensemble averages. MD has also been called "statistical mechanics by numbers" and "Laplace's vision of Newtonian mechanics" of predicting the future through animating nature's forces and allowing insight into molecular motion on the atomic scale.