Isoprenoids are a large, diverse class of naturally occurring organic chemicals that are essential for cell survival. Over 35000 isoprenoid molecules have been identified to date in the three domains of life (bacteria, archaea and eukaryotes), and they are involved in a wide variety of vital biological functions.

The isoprenoid biosynthesis pathway is an important metabolic pathway that produces a range of sterol and non-sterol isoprenoids, vital for multiple cellular functions. Cholesterol is an important sterol end product of the pathway and functions not only as a structural component of the plasma membrane, but also as the precursor for steroid hormones, bile acids and oxysterols. In addition, the pathway synthesizes non-sterol isoprenoids (such as the side chains of ubiquinone-10 and heme A, dolichol, isopentenyl tRNA and the farnesyl and geranylgeranyl groups of isoprenylated proteins) which are incorporated into diverse classes of end products that participate in processes relating to cell growth, differentiation, cytoskeletal function and vesicle trafficking. 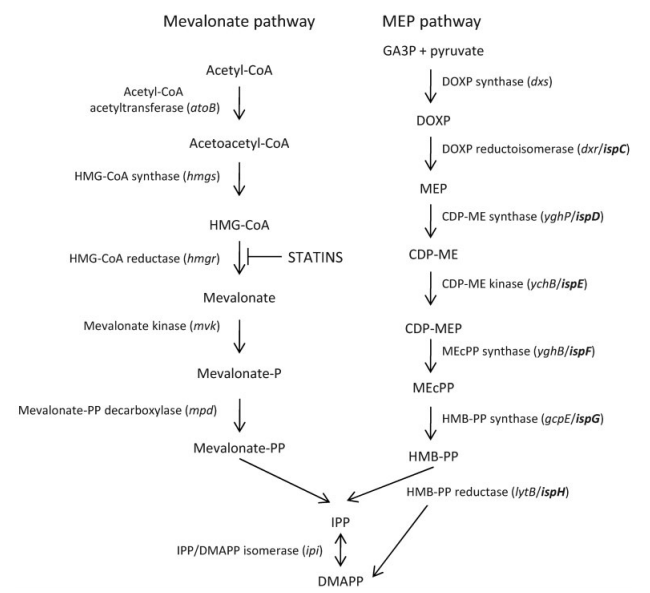 The mevalonate pathway is the non-sterol, pre-squalene part of the isoprenoid biosynthesis and is involved in the synthesis of all isoprenoids. This pathway starts with three acetyl-CoAs, which are converted into 3-hydroxy-3-methylglutaryl-CoA (HMG-CoA) in two consecutive enzyme steps. HMG-CoA is then converted into mevalo-nate (MVA) by the rate-limiting enzyme of the pathway, HMG-CoA reductase. Subsequently, MVA is phosphorylated twice, which produces 5-pyrophosphomevalonate (MVAPP). Decarboxylation of this latter compound yields isopentenyl pyrophosphate (IPP). After isomerization of IPP to dimethylallyl pyrophosphate (DMAPP), a head-to-tail condensation of IPP to DMAPP results in the formation of geranyl pyrophosphate (GPP). Addition of another IPP gives farnesyl pyrophosphate (FPP), the branch point metabolite of the pathway, which is the precursor of geranylgeranyl pyrophosphate (GGPP); GGPP is produced by the condensation of one FPP with one IPP molecule.

It is significant that human/mammalian isoprenoid biosynthesis is the target of several FDA-approved drugs, including those used in the treatment of cancer (taxol), bone disease (bisphosphonates) and hypercholesterolaemia (statins). In humans, cholesterol biosynthesis proceeds via the mevalonate pathway, which is responsible for the production of the IPP precursor molecule. Some of the best-characterized and most effective inhibitors of IPP biosynthesis are the cholesterol-lowering statins. Statins disrupt a reaction in the mevalonate pathway by binding to and inhibiting HMGR, the rate-limiting enzyme for cholesterol biosynthesis in mammals. Nitrogenous bisphosphonates (NBPs) such as pamidronate and zoledronate, which are predominantly used to treat bone disease, also target the mevalonate pathway by inhibiting farnesyl pyrophosphate synthase. The IPP isomerases have been considered as potential targets; however, as humans possess the type I isomerase, specific inhibitors of the type II enzyme could function to target pathogenic bacteria such as multidrug-resistant Staphylococcus.

Since the isoprenoid biosynthesis pathway is an important target in many areas of ongoing research, new inhibitors to block this pathway are being developed. Inhibition of this pathway is already applied in the treatment of cardiovascular disease, hypercholesterolemia and metabolic bone disease and is a possible new therapy in cancer treatment. Therefore, Creative Proteomics developed a sensitive and specific method for the detection and quantification of nearly all intermediates of the isoprenoid biosynthesis pathway using UPLC–MS/MS, which can be used to investigate the specificity of inhibitors of this pathway.

How to place an order:.