Carnitine (L-3-hydroxy-4-N,N,N-trimethylaminobutyrate) is an essential metabolite, which has a number of indispensable roles in intermediary metabolism. First, carnitine has an important role in the transport of activated long-chain fatty acids from the cytosol to the mitochondrial matrix, where β-oxidation takes place. Secondly, carnitine is involved in the transfer of the products of peroxisomal β-oxidation, including acetyl-CoA, to the mitochondria for oxidation to CO2 and H2O in the Krebs cycle. Other functions of carnitine include modulation of the acyl-CoA/CoA ratio, storage of energy as acetylcarnitine and the modulation of toxic effects of poorly metabolized acyl groups by excreting them as carnitine esters. Carnitine is present in most, if not all, animal species, and in several microorganisms and plants. Animal tissues contain relatively high amounts of carnitine, varying between 0.2 and 6 µmol.g-1, with the highest concentrations in heart and skeletal muscle. Although animals obtain carnitine primarily from the diet, most mammals are capable of synthesizing carnitine endogenously. 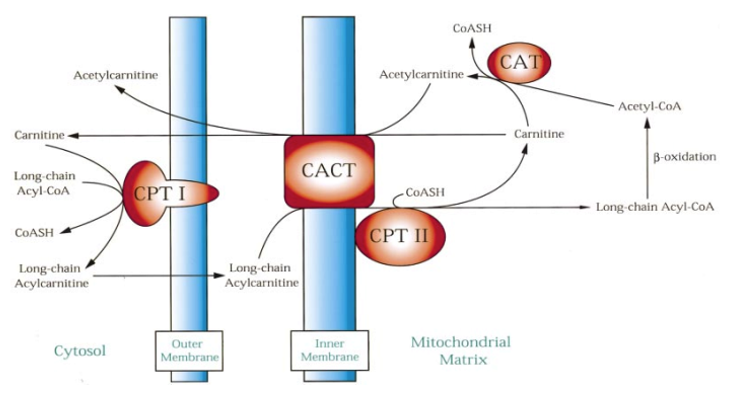 Carnitine is synthesized ultimately from the amino acids lysine and methionine. Lysine provides the carbon backbone of carnitine and the 4-N-methyl groups originate from methionine. In mammals, certain proteins contain N- trimethyl-lysine (TML) residues. N-methylation of these lysine residues occurs as a post-translational event in proteins such as calmodulin, myosin, actin, cytochrome c and histones. This reaction is catalyzed by specific methyltransferases, which use S-adenosylmethionine as a methyl donor. Lysosomal hydrolysis of these proteins results in the release of TML, which is the first metabolite of carnitine biosynthesis. TML is first hydroxylated on the 3-position by TML dioxygenase to yield 3-hydroxy TML (HTML). Aldolytic cleavage of HTML yields 4-trimethylaminobutyraldehyde (TMABA) and glycine, a reaction catalysed by HTML aldolase (HTMLA). Dehydrogenation of TMABA by TMABA dehydrogenase (TMABA-DH) results in the formation of 4-Ntrimethylaminobutyrate (butyrobetaine). In the last step, butyrobetaine is hydroxylated on the 3-position by γ-butyrobetaine dioxygenase (BBD) to yield carnitine. 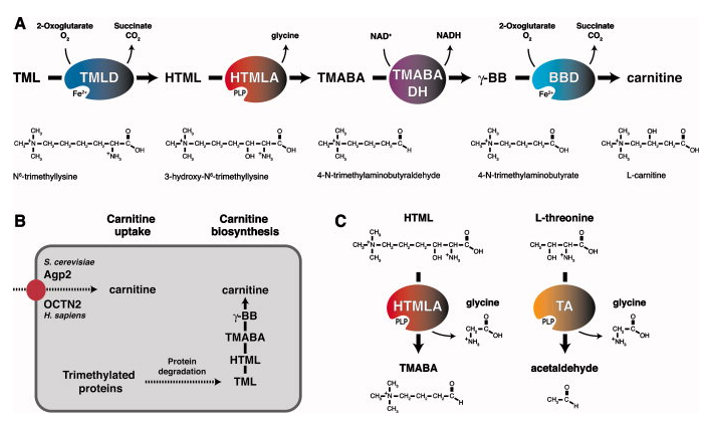 Several methods have been described to measure the concentration of the carnitine biosynthesis metabolites in biological fluids and tissues. In Creative Proteomics, we recently developed a fast and easy method to determine the concentrations of the metabolites of the carnitine biosynthesis. Without prior purification, the sample is derivatized with methyl chloroformate, followed by separation of the analytes by reversed-phase ion-pair HPLC using hepta-fluorobutyric acid as an ion-pairing agent, and detection by electrospray tandem MS. With this method, TML, HTML, butyrobetaine and carnitine can be quantified in a single analysis. This new method is highly reproducible, and has a detection limit of 0.25 pmol for each compound.