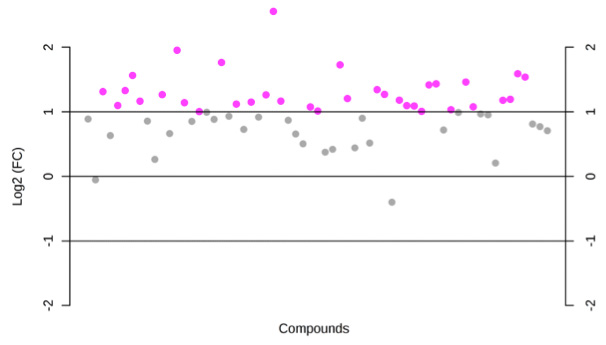 However, confusion and ambiguity can arise from this use. For example, although 2 fold is 200%, or 2x, a 2-fold increase, is, as noted above, understood by some to mean an increase of 300% as in "90 is 2 times greater than 30." Yet, several dictionaries, including the Oxford English Dictionary and Merriam-Webster Dictionary, as well as Collins's Dictionary of Mathematics, define "-fold" to mean "times," as in "3-fold" = "4 times." Likely because of this definition, many researchers use both“fold”and“fold change” to be synonymous with "times," as in "2-fold larger" = "2 times larger." Among some experts in this field use persists of fold change as in "40 is 1-fold greater than 20." Therefore, one could argue that the use of fold change, as in "X is 3-fold greater than 15" should be avoided altogether, since some will interpret this to mean X is 45 whereas others will understand this to mean that A is 60.

Fold change method is often used in the analysis of gene expression data in transcriptomics, proteomics and metabolomics, for measuring the changes in different conditions. The obvious advantage of fold change analysis is that it makes sense to biologists. A disadvantage to and severe risk of using fold change method in this setting is that it is biased and may miss differentially expressed genes with large differences (Y-X) but small ratios (X/Y), leading to a high miss rate at high intensities.