TALK WITH AN EXPERT

The post-translational addition of a functional group covalently bonded to the protein are common to biologic drug substances, which can affect the structure, stability, function, and protein interaction. N-acetylation is one of the post-translational modifications (PTMs), which append an acetyl group to the N-terminal amino group. N-acetylation degree might alter the charge, hydrophobicity, lifespan, folding characteristics and binding properties, and polymorphism in drug metabolism. To confirm protein identity, ensure product quality and consistent manufacturing process, and avoid a potentially harmful side effect and low efficacy in the patients, N-acetylation analysis is an important biochemical technique during the processes of drug discovery. It can be used to analyze the N-terminal modification of biological agents or target proteins. 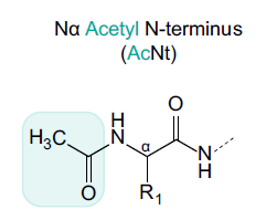 We Can Provide but Not Limited to:

Proteins are extracted from lysed, digested by detergent-free trypsin, and then the complex mixture of peptides is separated by multi-dimensional chromatography after removal of N-Pyroglutamate. To enrich the N-acetylated peptides, the combined fractional diagonal chromatography (COFRADIC) method, or the strong cation exchange chromatography (SCX) method, or CNBr-activated sepharose resin will be employed depending on your special requirement for your project. CNBr-activated sepharose resin is simpler than previous methods, and the ratio of digest to rein will not influence the efficiency. Then enriched N-acetylated peptides are subjected to mass spectrometric analysis. To get better yield to N-acetylation identification, a MS data acquisition method, singly charged ion inclusion (SCII), will be conducted to allow the singly charged precursor.

Creative Proteomics's analytical scientists can provide complete confirmation of N-acetylation of target proteins, samples, or unknown proteins, as well as quantitative information on N-acetylation degree. Quick turnover, clear and concise written reports and protocols, and customized services to will be provided to help customers solve analytical and technical problems.

*For Research Use Only. Not for use in the treatment or diagnosis of disease.

Scientists from Creative Proteomics are glad to discuss with you the details of your project and develop tailored experimental strategies. Please contact us for more information.